We’ve seen the movie and listened to the original cast recording at least 525,600 times, and still it’s not enough. RENT, the hit Broadway musical that recently surpassed its 20th anniversary, is still beloved in the heart of millions. Created by the brilliant late Jonathan Larson, RENT brought the world a beautiful, meaningful tale of stark reality and the importance of being there for each other. Two decades later, the show has toured across the globe, graced hundreds of amateur stages and continues to revive epic professional productions.

1) It completely changed the face of Broadway culture.

RENT not only shed light on some real-world topics such as HIV and AIDS, but was one of the first Broadway musicals to develop a serious following. ‘Rent-heads’ were basically like today’s Hamilton fans. They made camping out on a crowded NYC sidewalk and stage dooring cool…and for that we thank them.

2) It taught us to never take friendship for granted…

While each character comes from a drastically different past, they band together to tackle even the bleakest hardships. In the face of tragedy, this group of friends support each other and learn a lot about life along the way.

3) …and to always remind your loved ones that you care.

This tear-jerking musical taught us that life is short. It reminds us that we must live life to the fullest, embrace those around us, and never hesitate to say (or sing) that we love someone.

While the stage version is ALWAYS better, the show’s 2005 movie adaptation included numerous original cast members and introduced the beauty of RENT to a whole new audience!

5) The story was originally created by a brilliant artist who was lost too soon.

Writer and composer Jonathan Larson was only 35 when his work was taken to the New York City stage, and he was determined to commentate on various “taboo” social issues. Unfortunately, Larson passed away on the first day of Off-Broadway previews. From then on, the actors performed in his honor.

6) It showed us that being different is something to be proud of!

As a musical centering around struggling artists desperate to survive in NYC, RENT brings audiences a group of misfits that aren’t your typical Broadway leads. Whether you’re sassy like Angel, awkward like Mark or wild like Maureen, this show embraces our differences.

There’s a smorgasbord of scrumptious roles for aspiring thespians! Whether it’s the dream of playing the iconic role of Mark, or belting “Out Tonight” as Mimi, ‘Rent-heads’ old and new are obsessed with adding this show into their repertoire.

8) …and some of the greatest songs.

“Seasons of Love”, “Take Me Or Leave Me”, “I’ll Cover You”, “One Song Glory”…Need I say more? (And what musical has a tune that asks the audience to moo?)

9) It created some amazing Broadway/TV/film stars…

The original Broadway cast cranked out some serious talent! Many actors, like Anthony Rapp, went on to dominate the Broadway stage in other big-name productions. Others, like Taye Diggs and Idina Menzel, took to Hollywood for thriving TV and movie careers. Who knew that the original Maureen would tackle the role of a Disney queen?!

10) …who talk about how life-changing this show was, even to this day.

It’s been twenty years and folks are still asking the original cast about their experience in RENT. During his tour with If/Then, Anthony Rapp recently said, “There was no way to know that it would change all of our lives.” In 2012, Adam Pascal told Broadway.com, “I hope to create memorable roles in the future, but I don’t know if anything will have the impact that Rent has had in musical theater.”

11) It proved Broadway was a powerful platform to address real world issues.

Pre-Rent, Broadway was not known to address social and economic issues to the scale it does today. RENT proved that a musical could deal with sensitive topics, and still be a massive success commercially. This Tony Award Winning Best Musical covered themes such as the Aids epidemic, addiction, and economic disparities in America. Rents’ success paved the way for other shows to boldly tackle hard issues in society.

12. It taught us to measure our lives in love.

525,600 minutes can seem like an eternity, but can also can fly right by us without much warning. So, what will you do with those minutes; that is the provoking question RENT asked us. Will you spend your minutes angry, afraid & bitter, or will you spend them in love with your friends & family (and several cups of coffee). 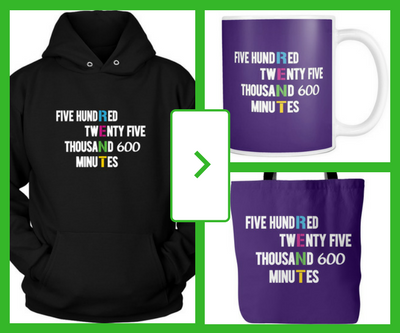