Games are the perfect way to break the ice and engage people of all ages. Within the structure of a drama class, games can be used as a get-to-know-you exercise, for warm-up, to introduce or practice a new skill or just for fun.

Here are 10 drama games that are ideal for your next class:

Three chairs are set up in a row at the front. Pick one person to sit on the “park bench,” aka the row of chairs. They can pretend to read the newspaper, watch the birds, etc., but they must remain seated on the bench at all times. Select a second person to be the pedestrian. Their job is to embody a character and try to get the park bench occupant to laugh or leave the bench. They are not allowed any physical contact.

Choose one person to be the party host and ask them to leave the room briefly. Choose three people to be party guests, and have the rest of the students suggest characters for each of them (such as man on a rollercoaster, Justin Bieber, girl who has lost her pet snake, etc.). The party host comes back into the room and returns to the front.

This can be played in a small group or large group. The teacher starts the story with one sentence (i.e., “Once upon a time, there was a princess who dreamed of being an astronaut”). Moving clockwise around the circle, each student adds one word to the story. The circle is repeated as many times as the teacher deems necessary until they feel the story is finished.

You will need a larger playing space for this one — going outside or into a gymnasium is preferable. This is like a giant game of “Rock, Paper, Scissors.” Giants beat elves because they can step on them. Wizards beat giants because they can shrink them. Elves beat wizards because they are quick and can duck their magic.

Divide the students into two teams and put them on either side of the playing area. Teams huddle together and choose which of the three they will play first. They will also need to have a backup in the event that the other team has selected the same one.

Once both teams have chosen, they meet in the middle and face each other. The teacher calls out, “Ready, set, go!” and both teams must yell what they chose while acting it out. Whichever teams wins the face-off chases the other team back to their side and tries to tag as many players as possible. Any players they tag from the losing team must now join their team, and they continue onto the next round. The game is over when one team has all the players on its side. 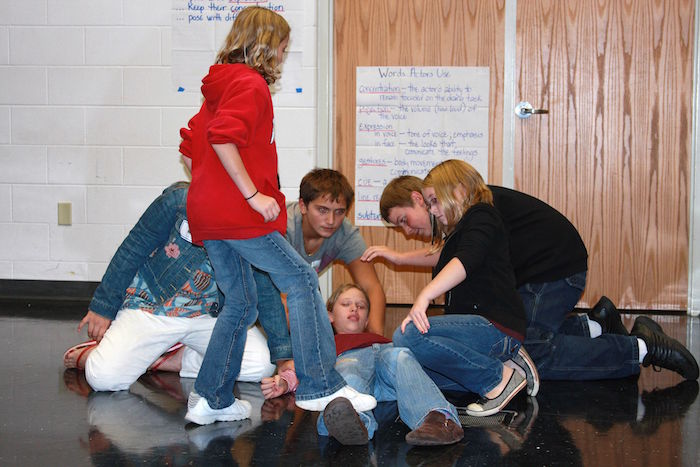 Divide the group into teams of four to six people and have each team choose a spot around the room. The teacher calls out a scene (such as Spiderman at the scene of a bank robbery, a birthday party gone wrong or a television awards show) and then counts down from 10. Teams have 10 seconds to organize a tableau and then freeze. The teacher then goes around and views each tableau before choosing a winner for that round. The winning team receives a point. Every student from the team must participate in the tableau or the team will be disqualified from the round.

Tip: Remind the students about the use of levels and facial expressions at the start of the game.

Choose two to four students to start onstage and give them a scene to start (such as lifeguards rescuing someone from drowning). The teacher calls, “Action!” and the students begin acting out the given scene. At any point, the teacher calls “Freeze!” and the whole scene must freeze. The teacher selects one new volunteer, and they can tap any of the people onstage to go sit down and the assume that actor’s position.

When the teacher calls “Action!” again, the person who just tapped in must start a whole new scene based on the positions the remaining actors ended in. The other actors will need to improvise and join in the new scene. It must be completely different to the scene that was happening before. Every time the teacher calls “Freeze!” new students replace the previous ones and begin a new scene.

The teacher selects one person to be a gravekeeper, and they stand off to the side. The other students lie on their backs on the ground with their eyes open. They must stay completely still, with a straight face. The gravekeeper’s job is to go around and try to make each person laugh or speak using only acting. They are not allowed to touch the person on the ground. Anyone they succeed at making laugh is alive again and joins the gravekeeper in going around and trying to make the other students laugh or speak. 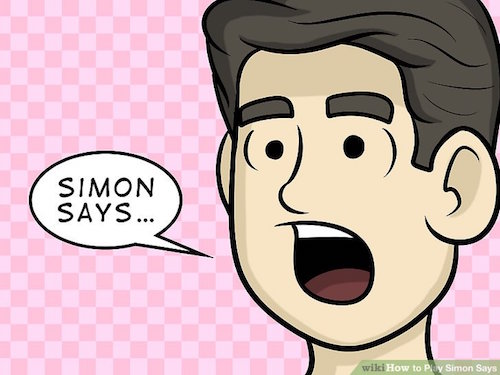 This is a great game for helping your students learn stage directions. This game follows the usual rules of “Simon Says.” Students should only do what the caller says if they say “Simon says.” If they do not put “Simon says” in front of the instruction and the student does it anyway, they are eliminated. The teacher calls out stage directions, such as downstage right or center. Students can only move to those places on the stage if the teacher says “Simon says” in front of it. Any students who move there otherwise are eliminated. Try to keep the calls coming quickly to keep the game interesting.

The teacher selects one student to sit in a chair and face away from the rest of the group. Ask the student in the chair to close their eyes. Select three students from the remaining group and have each one take a turn standing behind the chair and saying, “Greetings, your majesty” in whatever voice they like. Once all three students have gone, the student in the chair must guess who each one was. 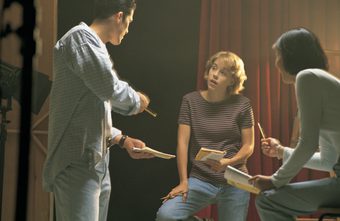 Playing drama games is a great informal benchmark for where students are at in both comfort and range. Having them engage in games continuously over the length of the course allows you to see visible progress as students learn, become more comfortable and grow their abilities. Encourage everyone to participate and watch as they flourish and have fun!

Which drama games would you recommend? Let us know in the comments below…