Brendon Urie is best known as the lead singer and only remaining original member of rock group Panic! at the Disco. In an industry where artists are chosen more for their looks and marketability than talent, and auto-tune is every talentless singer’s best friend, Brendon is one of the rare true talents. Not only does he write the majority of the music, but he’s also an insanely talented vocalist who continues to wow fans with his pipes. He possesses a tenor voice, which encompasses four octaves (D2 to C7.)

Urie made his debut on Broadway in “Kinky Boots,” a musical by Cyndi Lauper. He played the lead role of Charlie Price from May 26, 2017, through August 6, 2017. His run with the show was met with stellar reviews and extensive press coverage.

I have not seen Kinky Boots, nor have I seen a bootleg version of Brendon’s time in the show, but being a huge P!ATD fan, I can’t help but think about what roles I’d love to see him play in some of my favorite Broadway shows. For these choices, I have taken into consideration his vocal skills, charisma, and sex appeal.

The film, starring Hugh Jackman was hugely popular at the time of its release toward the tail end of 2017. Though Hugh Jackman has said that he’d happily don the top hat again in a sequel, a Broadway adaption would be the next logical step rather than another movie. In order to successfully transition from stage to screen, the hypothetical show would need the right star. Hugh Jackman is a terrific actor and talented singer, and although he has performed on Broadway before in his one man show and in the OBC of “The Boy From Oz,” I feel that a great successor would be Brendon Urie. He already covers the films title song “This is the Greatest Show” for the “The Greatest Showman: Reimagined soundtrack,” and knocked it out of the park, and fans of P!ATD will know just how well he can pull off a top hat and red jacket. This one is written in the stars!

The Phantom of the Opera is beloved by many and revered to be the greatest musical of all time; it’s certainly the longest running! The title character of the Phantom is supposed to be dark, mysterious, and sexy despite his facial disfigurations; charming beyond belief and possessing top-notch vocal skills. This role screams Brendon Urie!  The role calls for a tenor or a high baritone singer, and Mr. Urie would rock the hell out of the half mask. I’d kill to hear him belt out “It’s over now, the music of the night!” To be fair, I do think that he’d be a great Raoul, too, but true “phans” know what a terrible character Raoul is, so I won’t even go there.

In the tragic musical about the fall of Vietnam, John is an ancillary character; as Chris’s friend and comrade, he plays a key role in several scenes and opens the second act with the soulful “Bui Doi” number. I do not doubt in my mind that Urie could take the song to levels that no one has before.

The film was wildly successful in 2001 when it was released. For years, a stage adaption was rumored to be in the works with the film’s stars Ewan McGregor and Nicole Kidman, though nothing came of it for years. On July 10, 2018, a new version of the musical premiered in Boston at the Colonial Theatre. The cast included Aaron Tveit and Karen Olivo. With an opening date on Broadway set for July 26, 2019, the previews will begin on June 22 at the Al Hirschfeld Theatre. The jukebox musical has incorporated more modern songs into the new production, so if Brendon were to play romantic writer Christian, who’s to say maybe a Panic! song couldn’t be included as well?

“After 16 years on the Great White Way, the musical is still going strong, with a film adaption allegedly in the works. The male lead, Fiyero has been played by rock singer and American Idol alum Adam Lambert; a rich bad boy with a soft side he keeps hidden from the world, the character goes from an airheaded playboy to a hero in his own right. Given his affinity for dancing and his ability to hit higher notes, I could easily see Beebo courting everyone’s favorite witches.

The jukebox musical comprised of Beatles songs was released in 2007 to mixed reviews. A stage adaption has never surfaced, but, if it ever were to happen, I couldn’t think of a better actor to step into Jim Sturgess’ shoes than Brendon Urie. Although the role of Jude calls for a British accent (the character hails from Liverpool,) I’m sure with the right dialect coach, Urie could easily pull it off. 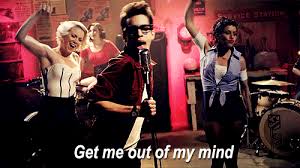 This musical uses the music of Buddy Holly to tell the story of the beloved musician’s rise to fame and his tragic end.  In the music video for “Ready to Go (Get Me Out of My Mind) one of the characters that Urie impersonates is a Buddy Holly-esque singer. He had the look and moves down pat.

The fictitious rock god seen in the 80s rock jukebox musical has been played by the likes of Tom Cruise in the film adaption. He’s portrayed as a washed-up alcoholic, blowing gigs and burying his sorrows in alcohol, drugs, and pretty girls. If the show were to ever reopen on Broadway, or get the “Live” treatment on TV, I think Brendon would be an interesting Stacee Jax, if for no other reason than to hear him belt out iconic rock anthems.

I am well aware that this one is a bit of a stretch as Melchior is supposed to be a teenager and Brendon Urie is 31, but he could pull off the character’s broody personality and would kill songs like: “Totally Fucked,” “All That’s Known,” “The Bitch of Living,” and “Left Behind.” If late 2000s Brendon Urie had done a musical, this is the one he’d have done.

I don’t know why I keep mentally casting Brendon in these broody roles, but we already know that he pulls off guyliner in a way that few can and his rendition of “One Song Glory” would literally explode all of the ovaries everywhere.

If anyone could follow in John Cameron Mitchell and Neil Patrick Harris’ immortal footsteps in the role of the transgendered rock star Hedwig, Brendon Urie is your man! He can wear the heck out of heels and he would slay “The Origin of Love.”

This one follows much the same line of reasoning as my previous suggestion. Frank N Furter is a pansexual alien from Transexual who likes to dress like a woman and create men in a lab, and he still has the time and energy to seduce both Brad AND Janet. This role has Brendon Urie written all over it. With his trademark dirty sense of humor, he could ad lib his way through the show, and it would be genius. I will be severely disappointed if this one never comes to be.

So, there you have it, my dream roles for Brendon Urie to play either on Broadway or in some incarnation of said shows. I am in no way affiliated with Brendon or with Panic! at the Disco, I’m just a huge fan of the band, the man, and awesome musical theater.