Did you ever have a day that didn’t turn out the way you’d expected?

You’re all dressed up for your big night. For months now you’ve been the talk of the town. The critics love you; the audiences love you, the nominators love you. You already won the Drama Desk a few weeks back, and tonight your show is nominated for more Tony Awards than anything else in the season. Everyone your parents have ever talked to are watching. You deserve this. Truly, you do. And you look mah-velous! Finally, they get to your category. When the presenter says your name on the list of nominees, your date squeezes your hand — one last vote of confidence, “You got this, babe! I believe in you.” The envelope is torn. And…

… they call someone else’s name.

I can tell you from personal experience: not winning is a miserable sensation. And it’s especially painful when everybody said you would. But, hey, that’s showbiz. Here are a couple of instances throughout Tony Awards history when people got robbed.

They deserved better. Here are their stories…

Of the four musicals nominated in 1982, only two actually deserved to win. Those were “Nine” and “Dreamgirls”. The also-rans that season were the cloyingly twee “Joseph and the Amazing Technicolor Dreamcoat” and the obscure honkytonk longshot “Pump Boys and Dinettes.” For the majority of that season, however, “Dreamgirls” had dominated the landscape. The show was a big hit for its producers, The Shubert Organization. Jennifer Holliday’s bombastic turn as Effie White was not to be missed. The show’s director and choreographer Michael Bennett (“A Chorus Line”)  had delivered a seamlessly slick production with an unrelenting drive. The show was dynamite.

Then, on the very last day of Tony eligibility, a new competitor arrived. The Nederlander Organization (longstanding rivals of the Shuberts) had opened “Nine”, an intimate musical based on the Frederico Fellini film “8 ½.” The show had practically materialized from thin air. But, man, was it was captivating… and styled with artful restraint by director Tommy Tune. To be frank, “Nine” was downright sexy. Those assets earned the show 12 Tony nominations. “Dreamgirls” earned 13.

On Tony night, the race was neck-and-neck going into the final lap. For Best Director, Tommy Tune (of “Nine”) beat Michael Bennett (of “Dreamgirls”). In an equitable turn, Bennett was consoled by beating Tune for Best Choreography. The presenter for the Best Musical category that year was Lena Horne. “I hope I can read this without my glasses,” she chuckled while tearing at the envelope. “The winner is… NINE!” The audience was SHOCKED. The next morning in The New York Times, columnist Carol Lawson said, “The producers of ‘’Nine’ were jubilant as their show beat out ‘Dreamgirls,’ the lavish musical unofficially based on the rise of the Supremes. For most of the season, which was a particularly weak one for musicals, ‘Dreamgirls’ had no strong competition for the year’s awards. But all that changed when ‘Nine’ opened a month ago…” In the end, “Dreamgirls” won 6 Tony Awards — including one for Jennifer Holliday — while “Nine” won five. But one of those five was Best Musical, and that’s really the one that matters.

PS: If you want to know more about this fascinating story, I highly recommend Michael Reidel’s book “Razzle Dazzle.” I couldn’t put it down!

Look, a lot of people like to crap all over “Two Gentlemen of Verona.” But I’m here to tell you:  they’re wrong. Well, for the most part. No one can deny that the show has a catchy score; it’s tuneful and lively, full of sass and brass. The show’s composer Galt MacDermott (“HAIR”) said his inspiration for its sound was walking down Broadway on a nice day and hearing every kind of music pour out of open windows. The result was an eclecticism that warms like auditory sunshine.

Now, originally that production started out at Shakespeare in the Park. Then after receiving positive notices, it picked up its duds and legitimized itself on a Broadway stage. A STELLAR review from the Times established it as the one to see in 1972. Clive Barnes declared, “Love is in bloom and back in style. It has a surge of youth to it, at times an almost carnal intimation of sexuality, and a boisterous sense of love. It is precisely this that the new musical catches and makes its own.”

Meanwhile, it’s major competition wasn’t proving to be so accessible. Word around town pegged “Follies” as more of an accomplishment than an entertainment — sort of like a worthy experiment that mostly paid off, even if it was a chore to read the scientist’s findings. Critic Walter Kerr didn’t seem to know what to make of it. The first paragraph of his review called it “exhausting,” and “tedious.” But then by paragraph five he said it was a “huge entertainment.” Still, despite his indecision, the Tony nominations favored “Follies” with 12 and “Two Gentlemen” with only 9.

On the big night, “Follies” had nearly a clean sweep. It took home awards for direction, choreography, lighting, scenery, costumes, score, and for actress Alexis Smith. The only award “Two Gentlemen” won was for Best Book of a Musical (John Guare & Mel Shapiro). That’s why it was such a shock when “Two Gentlemen” took Best Musical. And what a night it must have been for its producer (and founder of the Public Theater), Joe Papp. Not only had Papp produced “Two Gentlemen” — that year’s Best Musical — but he had also produced that year’s Best Play — “Sticks and Bones” by David Rabe.

However, history seems to have revised this decision. Since losing the Tony, “Follies” has received two major revivals on Broadway. Meanwhile, any and all attempts at “Two Gentlemen” have fizzled in the rain.

So, what were the factors that led to this upset? Well, for starters, the prior year “Company” had dominated the awards. “Follies” was another effort by the same collaborators as “Company”, Stephen Sondheim and Hal Prince. This year’s experiment yielded similar results and the voters wanted to support variety. Also, the other big Galt MacDermott show “HAIR” had been ahead of its time and, therefore, didn’t win in its respective year. So, it is possible that this award for “Two Gentlemen” was an act of self-validation by the voters. It was as if to say, “See, we’re with hip! We’re with it… now!”

Personally, though, I think voters were blinded by “Two Gentlemen’s” pure sunshine of a score. Anyway, it sure beats a lot better than “Follies” callused and withered heart.

3. Best Performance by a Leading Actress in a Musical: Idina Menzel vs. Tonya Pinkins, 2004 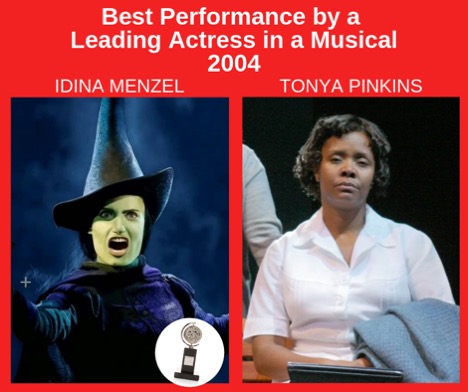 It’s not easy being green. In fact, according to Ben Brantley of The New York Times, it’s a lot easier being pink. At least it is when you’re Kristin Chenoweth (read: popular). Mind you, Brantley always has been a worshipper of KC. But his review for “Wicked” officially lit the candle at her altar. He even went so far as to declare her the show’s one saving grace. “Be grateful,” he said, “very grateful, that Ms. Chenoweth, who spent a brief exile in the land of sitcoms, has returned to the stage. She provides the essential helium in a bloated production that might otherwise spend close to three hours flapping its oversized wings without taking off… Yet it’s hard to avoid the impression that whenever Ms. Chenoweth leaves the stage, ‘Wicked’ loses its wit.”

Needless to say, he didn’t find Idina Menzel to be nearly as appealing. He barely got around to mentioning her before circling back to Kristen. As he put it, “The talented Ms. Menzel will no doubt dazzle audience members whose musical tastes run to soft-rock stations. But for aficionados of the American musical, it’s Ms. Chenoweth who’s the real thing, melding decades of performing traditions into something shiny and new. ‘Wicked’ does not, alas, speak hopefully for the future of the Broadway musical. Ms. Chenoweth, on the other hand, definitely does.”

To add insult to injury, it was ruled by the Tony nominating committee (who were likely solicited by the show’s producers) that both Idina and Kristen would be eligible to compete in the same category — Leading Actress in a Musical. When they were both nominated in that category, it was impossible to think their onstage rivalry didn’t bleed into the wings.

During the campaign, Menzel did have a slight advantage; Chenoweth had already won a Tony for “You’re a Good Man, Charlie Brown” and, let’s face it, Elphaba does way more heavy lifting in “Wicked”. Anyway, most voters thought that the two “Wicked” actresses would split the vote and, therefore, neither would win. That made the front-runner Tonya Pinkins. She was nominated for her breathtaking performance in “Caroline, or Change.” Pinkins had won previously in 1992 for “Jelly’s Last Jam” and a lot of people were saying she deserved it again. She was MESMERIZING as Caroline, the put-upon maid to a Jewish family in a haunting little show about race relations in the 1960s. Mark Swed of the Los Angeles Times wrote of Pinkins, “If you needed no other reason to see [‘Caroline, or Change’], Tonya Pinkins’ understated, nuanced performance would supply it. Hers will, I hope, one day be remembered as a Broadway classic for its ability to balance smoldering anger with radiance.”

Alas, come Tony night, it was Menzel took home the trophy — in which case Pinkins and Chenoweth were the ones turning green.

If there was an award to be given for “Biggest Tony Award Upset in History,” this would easily win. By the time the Tonys finally rolled around in 2004, the statues had practically been engraved for “Wicked.” And, why not? The show was unstoppable. It was a critic-proof juggernaut. Its word-of-mouth was golden, as were its ticket sales (then and in the 15+ years since). When an informal poll was given among Tony voters by The New York Times, the consensus was that “Wicked” would definitely win. But then some naughty puppets got in the way.

The producing office for “Avenue Q” waged an all-out war against its competition. They ran an ingenious campaign encouraging people to, “Vote Your Heart.” They took out full-page newspaper ads and held a pizza party for out-of-town voters. They even distributed CD’s with a new song titled “Rod’s Dilemma.” The song features the entire cast of the show all helping Rod determine how to cast his vote for the new Rotary Club president (“Why not vote for the person who deserves it?”). Promotional buttons for “Q” were distributed at the theater. They even decorated the box office like a campaign headquarters. In total, the effort cost producers around $300,000. And, believe it or not, it worked.

Over the course of the evening, “Avenue Q” won 3 Tony Awards: Best Book/Lyrics, Best Original Score, and Best Musical. These 3 awards are the trifecta; they’re the most important for a new musical to win. “Wicked”, on the other hand, won for Idina Menzel, Best Scenic Design, and Best Costumes. Consequently, “Wicked” director Joe Mantello also won that night, but for his work on “Assassins.”

Still, if I had the retrospective choice between investing in “Avenue Q” and investing in “Wicked,” my green would be on green — Tonys be dammed. During its run at the Golden Theater before transferring Off-Broadway, “Avenue Q” took in a respectable cumulative gross of $121,918,918. Meanwhile, “Wicked” has earned $1,276,318,914 counting. Fly high, you wicked witches!

NOTE: Didn’t see your favorite listed here? Please stay tuned! This is a continuing series and more Tony Awards Upsets are on the way.

Jeremy Scott Blaustein is a Drama Desk and Outer Critics’ Circle Award-nominated Broadway Producer, a Helen Hayes Award-nominated Actor, and a published novelist and historian. His work as a director has been seen by tens-of-thousands. For more info, please visit www.jblaustein.com