Everyone has their favorite onstage couple. Be it Tony and Maria, Collins and Angel or even Hamilton and Eliza, love stories remain an integral part of the theatrical world. A show can unfold in a fantastical place or a distant historical past, but the love story can transcend all of that and connect with audience members.

Here are eight real-life couples in the theatre business who found love:

1. Audra McDonald and Will Swenson

Six-time Tony Award winner Audra McDonald got a second chance at love in 2007 when she met her now-husband, actor Will Swenson. The pair met during a revival of “110 in the Shade,” which saw McDonald nominated for a Tony Award for her role as Lizzie Curry. Swenson was the understudy for Starbuck, Lizzie’s love interest, but clearly, McDonald saw him as a leading man. The couple married in 2012 at their home in New York. There’s nothing like a showmance with a fairytale ending!

This adorable twosome surprisingly did not meet while working together, even though David Burtka had several guest appearances on Neil Patrick Harris’ popular TV show, “How I Met Your Mother” and both have done theatre work in New York.

Their first meeting was on a street corner in New York when Harris ran into a mutual female friend who was out with Burtka at the time. In true “When Harry Met Sally” fashion, Burtka was in a relationship at the time, so when the two met again at a viewing party for the first season of “American Idol,” they decided to hang out as friends.

But, much like Harry and Sally, Burtka’s relationship eventually ended, and it became clear that the attraction between them was undeniable. While Harris was the first to admit love to an unsure Burtka, it was Burtka who first proposed one evening on the way to an event. Granted, Harris proposed the following year, so now they’re even. The two have been together for over a decade, now balancing hectic careers with raising their adorable twins, Gideon and Harper — and doing it all with style. 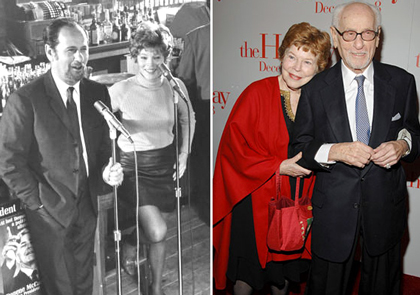 You might remember Eli Wallach from one of his later film roles as the adorable elderly neighbor who turns out to be a Hollywood legend in “The Holiday.” In reality, Wallach and his wife, Anne Jackson, were one of the legendary couples of American theatre. These two lovebirds took to the stage together many times throughout their long careers. In fact, the stage is where they first met in 1946, when they were both cast in a Tennessee Williams production. They married two years later and had three children.

Juggling parenthood and careers, they remained dedicated to their joint love of the stage, often giving each other respectful feedback after performances and continuing to look for opportunities to work together. The couple continued acting together and apart until Wallach died in 2014 and Jackson died in 2016.

Like many modern love stories, Broadway actors Jeremy Jordan and Ashley Spencer were first introduced through Facebook. After their online connection, the two opt to meet for a first date at a New York restaurant. After some liquid courage, Jordan banished his reserved side, and with the help of late-night karaoke, the romance blossomed. The two are now enjoying married life and busy careers. 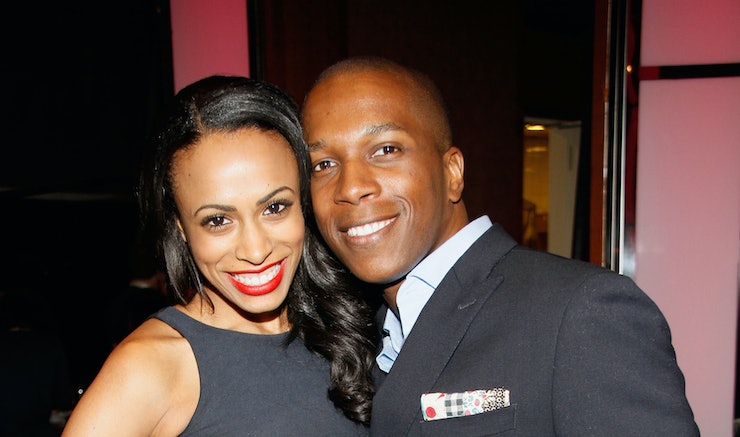 “Hamilton” actor Leslie Odom Jr. and wife Nicolette Robinson are both riding the high of successful stage careers after several years together as struggling actors. This New York couple’s story actually began in Los Angeles when Odom Jr. was working as Billy Porter’s assistant director on “Once Upon This Island.” Robinson showed up to audition, and Odom Jr. was instantly taken with her.

Robinson lost the role to another actress, but after a cast member was forced to drop out due to a death in the family, Robinson was cast, and it was up to Odom Jr. to get her caught up on the show. Their fast friendship soon turned to romance, and now the married thespians are expecting their first child. You can see this adorable couple get romantic in the music video for Odom Jr.’s sultry song, “Autumn Leaves.” The story of Julie Andrews’ 41-year romance with writer/director/producer Blake Edwards is proof that love can be found just about anywhere. The two met in passing on the way to their mutual therapist. After spotting Andrews in her car, he rolled down his window and spoke to her. It was a second marriage for both of them, and they adopted two young girls from Vietnam, growing their blended family that included children from previous marriages. They enjoyed a long and happy life together until Edwards’ death in 2010. 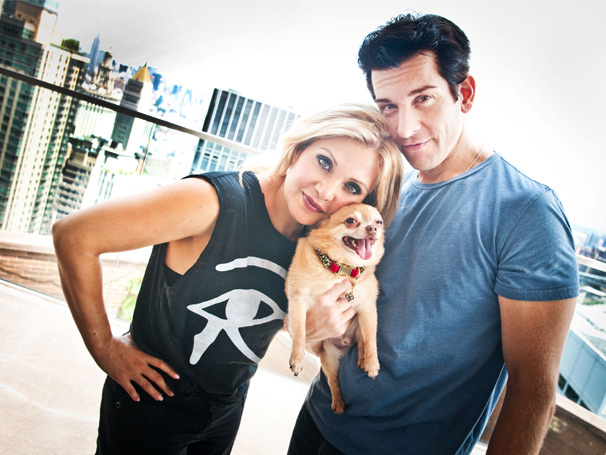 Another couple to survive the showmance, Orfeh and Andy Karl have been going strong since 2000. The couple met during the Broadway adaptation of “Saturday Night Fever” and have been conquering New York stages ever since. When Karl joined the cast of the show in progress, the two were immediately taken with one another. After a quick five-month courtship, they were engaged (Karl hid the ring in a box of Chinese takeout before he got down on one knee). It just goes to show you can’t fight fate. They even went on to play love interests in the smash musical “Legally Blonde.” After 17 years together, they’re as enamored as ever and continue to be each other’s biggest supporters.

Speaking of love at first sight, Tony Award nominee Christopher Jackson was head over heels when he first laid eyes on his now-wife at a reading for what later would become “In the Heights.” A chemistry test for the in-development show took fiction to reality when Jackson finally got up the courage to ask her out. The rest, as they say, is history. The two are now enjoying marriage and parenting their two children while advocating for autism research and awareness.

Whether it’s love at first sight or finding a match the second time around, these relationships are proof for even the most disbelieving that love exists outside of the stories and true romance continues long after the curtain closes.

Have a favorite Broadway love story? Let us know in the comments below…