You’ve probably heard the speech once or twice … a day …

every day of tech …

for every show you’ve taken part of:

“Please,” (they usually say ‘please’, it makes it seem like a request instead of a command) “if the prop isn’t yours, don’t touch it”

Well, from a seasoned Properties Designer, I will let you in on a little secret: you probably could touch it, and the world wouldn’t end …

But if you break it, well, may the theatre gods and the Stage Manager have mercy on your soul! 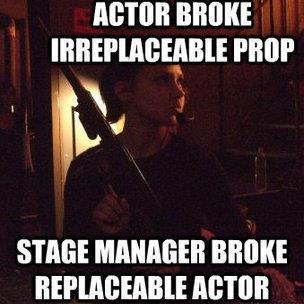 Props people are pretty well caricatured as over-anxious perfectionists desperately intent on protecting their wares.  I’m not saying that we’re all like that, but like any good caricature, there is definitely some truth there.  We can get a little edgy – but it isn’t our fault you know, it isn’t easy being a Properties Designer.

Do you even know exactly what a Props Designer’s job is?  I’m only asking because I’ve worked as one for over 10 years, and it has never been made exactly clear to me.  Every group, every person, seems to have a different idea of what constitutes a prop, and what all Props Designers should be in charge of.

If you believe the lists in the back of the Actor’s Edition of any script, Props are things carried on or off stage during the show.  That’s the easy definition – the one most people understand – and the job would be a lot easier if this definition stuck.  Another definition, a more comprehensive one, is anything that is not nailed down to the set – which, as you can imagine, really makes that list grow quite a bit.

You see, there are the hand props, but you also have costume props and set dressing.  So you ask the Set Designer about who gets the furniture and dressing, and you check to see if the Costume Designer has specific wants for the hats and purses, and you coordinate with the Lighting Designer on the lantern that serves as the only light in a scene, and you work with the Sound Designer on the working 1920s microphone.  So, you talk, and you  negotiate, and you collaborate with the other designers and THEN you make your lists and hope beyond hope that you’ve thought of everything …  But you haven’t, because all during rehearsals, you’ll be getting notes of new things that need to be gotten – and lots and lots of reminders of things that you already know.

So, now you have your ever-fluctuating list.  Now what?  Well, if you’re lucky, you are working on a show set in modern time, and you can just run out to the store and pick up what you need, or find it in props storage (again, if you’re lucky enough to have one).  If you’re not-so-lucky, than you have to do research – a LOT of research.  You’d be surprised how much obscure history you have to learn as a Props Designer.  For instance, did you know that barcodes were not placed on products until 1974?  And ballpoint pens were not commonplace in the home until the late 50s, early 60s?  You need to know this kind of thing if you want to do Props for show.

But even this is subject to change, because it is not your job to be 100% historically accurate – unless you are directed to be so, which you never are, because like all Designers, we make a world that is at the intersection of: What Is Right, What The Director Wants, and What The Audience Will Believe … oh yeah, and What Is Possible (that last one is the most important – budget rules our artistic lives). 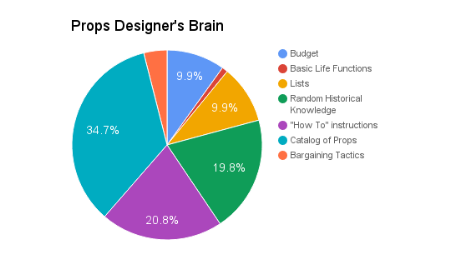 Getting/Making the props can either be where all the fun is, or the most stressful part.  It is different for every one, for every show, every time.  Me?  I love it.  Essentially we get paid (if you’re lucky) to shop and do crafts.  Do you like flea markets, rummage sales, thrift shops, antique malls, Arts & Crafts and Hardware Stores?  Let’s hope so, because you spend a large amount of your time at one place or another, searching for the things you need.

Sometimes that obtaining process is … a bit of a challenge.  I can’t say that I know this for a fact, but I’m pretty sure that all good props designers are probably on some kind government watch list.  Have you ever done Twelve Angry Men? Or West Side Story? How about Wait Until Dark? Or Sweeney Todd? Or Assassins?  Do you think it’s easy to get weapons without arousing suspicions?  Switchblades and Brass Knuckles are illegal – but props designers everywhere have to find them, or at least find realistic look-alikes.  Weapons are hard, but there are more embarrassing things in a props designer’s life:  Soap-on-a-Rope, nazi arm-bands and flags, severed limbs, several Red G-strings, ingredients for meth, vibrators, joints, handcuffs, pills, chains, pipes … the list goes on and on, and those are just the things I’ve had to buy – you don’t even want to know some of the things I had had to make!

But the worst?  The worst is Food Props.  Yes, Actors, that’s right.  We have something in common.  I’m fairly certain that we can all get together on this: Food Props just suck.  For everyone.  Trust me, Actors, I empathize with you, and trust me, it is no fun for us either: it is a drain on our budget; we have to work within everybody’s dietary restrictions; they’re a pain to keep replacing and making every day; and if they actually are good, they have a tendency to disappear.

But there is one thing to be said about Props Designers and Food Props: Jesus isn’t the only one who can turn water into wine.  We can too – and we’ll even do you one better and turn it into whiskey, scotch, tequila, rum, you name it, we do it.  All for you actors, all for you!

You see?  We don’t hate actors.  It’s true, you sometimes drive us crazy, but we don’t hate you.  We need you as much as you need us.  We also appreciate you.  There is nothing so satisfying as an actor who takes a special interest in our props.  Someone who really owns it, and uses it to their character’s advantage.  It sounds silly, but other Props Designers will understand – it’s the little things in life.

Like most Designers, for us Props people, we don’t look for recognition from the average theatre audience member.  I mean, what do you think someone would say if you went up to them after the performance and asked what they thought of the props?  There are some exceptions, but most of the time, if the audience didn’t take notice of it, it means we didn’t do anything wrong – and we celebrate!

Still, the next time you work on a show, take note of the Props and Dressing around you. Sometimes a Designer will find a way to leave their mark somewhere – either hidden on set, or taped to the furniture, or written in the notebook.  Take notice of their work, and respect it …

And please, Please, PLEASE Don’t Touch It! (Unless it’s yours!)

Have props designer tribulations of your own? We’d love to hear them, leave a reply below…