High adventure! The city of Agrabah cheered this past weekend when Telly Leung made his highly anticipated debut as Aladdin a few days early. The Broadway veteran, who was most recently seen in “In Transit,” made one jump ahead on his schedule, excitedly writing on Instagram: “Well, that happened! The incredible @aladdin team got me ready a bit early and I made my debut tonight as Aladdin – a few days early. Thanks to everyone at Agrabah for welcoming me with such love and warmth!”

Lucky for us Theatre Nerds, we caught up with the 37-year-old superstar a day before he hopped on the magic carpet for the first time. Check out our interview with Broadway’s newest Aladdin below:

Theatre Nerds: Congratulations on stepping into Aladdin! How has the journey compared to the many other shows you’ve worked on? I imagine being under Disney is magically different.

Telly Leung: This is my seventh Broadway show, and my second time replacing. I replaced Robin De Jesus in “Rent” on Broadway in 2006. Most of my Broadway experience has been originating roles, which has its own challenges: the pressure (and joy) of creating something from scratch, the constant changes during previews (what song is cut? What are the new lyrics? What joke are we trying out tonight?). But, there is a certain ownership of the material and the process that comes with originating a role.

Replacing in a show, especially in a role this big, has been a challenge. An actor always feels this constant pressure to play catch-up with the rest of the company. Luckily, I have a wonderful, warm, patient company at Agrabah, and everyone has been so supportive throughout the process. It’s truly a top-notch company. I feel very lucky.

TN: That’s wonderful! The “first look” pictures of you are awesome! Does it feel wild to be entering the world of such a beloved film?

TL: Thank you! Bravo to Matt Murphy, one of my favorite photographers in New York. There is certainly pressure to not disappoint all those people who have such a soft spot in their heart for the 1992 film. I count myself as one of those fans! All I can do is bring my sense of truth and honesty to the show, moment to moment, and attempt (to the best of my ability) to fill the big shoes left to me by the amazing Adam Jacobs, who originated the role.

TN: Did your “Allegiance” costar Lea Salonga, who is, of course, famous for voicing Jasmine and Mulan in the animated films, offer up any advice?

TL: My show-sister Lea didn’t offer any advice, but I loved hearing her talk about her wonderful experience being not one, but two Disney princesses. She had the most wonderful things to say about Alan Menken and what a warm person he is. I got to meet Alan recently at an event in Los Angeles, and it’s always a relief when you meet your heroes and they end up being as warm and down-to-earth as you hope they’d be!

TN: When you first watched the musical, what moment were you most excited to get a chance to do?

TL: Of course, I was excited to fly on that magic carpet. It’s a moment of pure stage magic that truly takes your breath away. But I was also excited to tackle “Proud of Your Boy,” Aladdin’s big “I want” song in Act 1. It’s a song that was cut from the movie, but it’s beautifully written by Alan Menken and Howard Ashman — and it has found new life in the stage production. It’s such a great exploration of Aladdin’s character, and I enjoy singing it every night!

TN: Aladdin is quite a demanding role, both physically and vocally. What measures have you been taking to prepare and to maintain stamina for the run?

TL: Aladdin is a beast of a role. One must stay healthy, hydrated and in shape to tackle it eight times a week. I eat right. I exercise. I rest. I drink lots of water. I take voice lessons. It’s a very disciplined life, but it’s worth it. 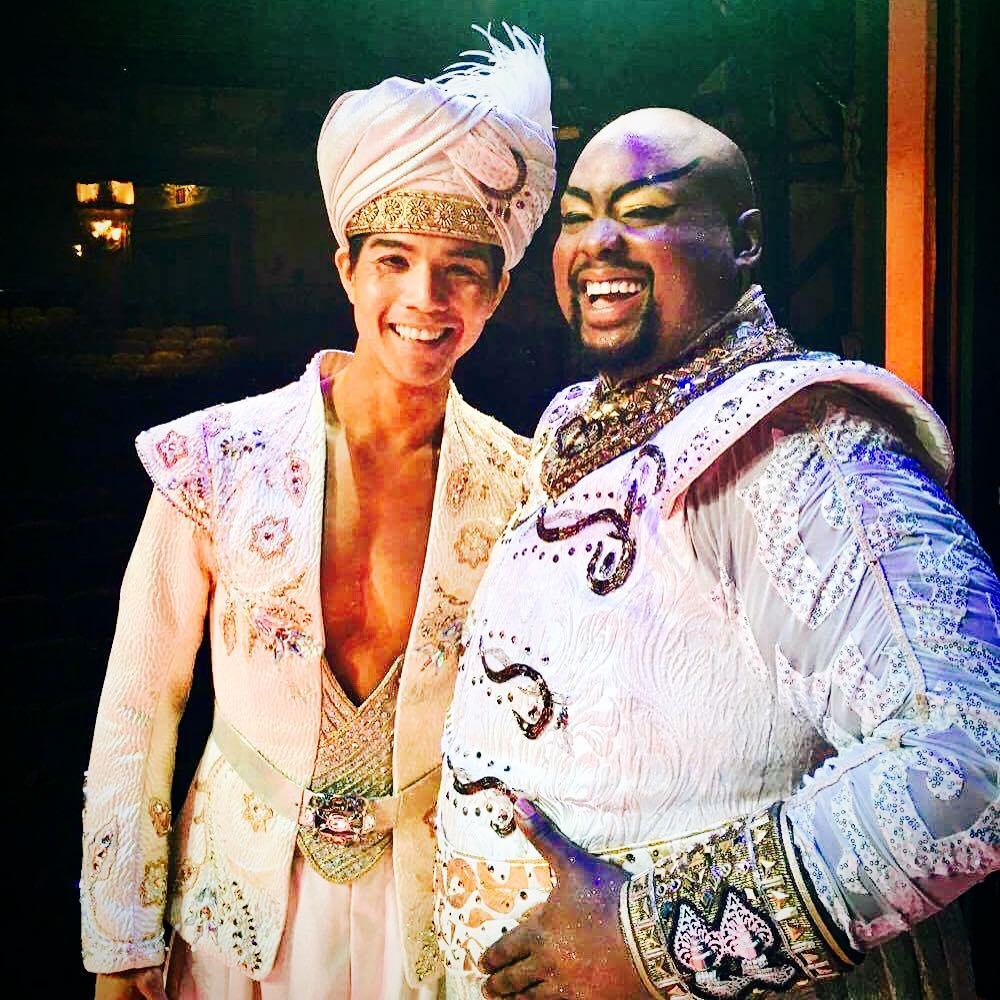 TN: I’m sure! Fresh off your incredible turn in the a-capella musical “In Transit,” have you taken anything you’ve learned from that experience and applied it to this one?

TL: Yes! I learned so much about myself vocally in “In Transit.” We all had to be vocal athletes in that show, and it was a lesson in stamina and preservation while still giving a full performance. I’ve certainly taken those lessons with me to the New Am!

“In Transit” was also a tight-knit company — a family — where everyone depended on each other. There was no lead. We were all part of an ensemble. I think this is an important dynamic to have in the theatre — even if the show has a lead. I’m playing the title character of “Aladdin” — what you may call the lead — but I don’t like to think of myself as the lead. I like to think of myself as part of a large ensemble of about 100 people — made up of dancers, actors, dressers, crew, stage, managers, ushers — that all make up the show that is “Aladdin.” That “little show,” family mentality is something I’d like to maintain and encourage during my time at Agrabah, even though it’s an enormous show.

TN: What are you most hoping your portrayal of Aladdin will give audiences?

TL: When I was in rehearsal, I had the pleasure of watching the show every night. I got to experience the emotional magic carpet ride the audience feels night after night at the New Am. The show itself is beautifully constructed, with great songs and a great story. All I have to do is take the audience with me on a little emotional rollercoaster and have them get on that ride with Aladdin.

TN: Although you’re living the dream right now, if you had a Genie suddenly poof into your life, what would your three wishes be?

TL: 1. I’d wish for the ability to fly like Superman.
2. I’d wish to go back in time and see all the Broadway shows I was too young to see! Can you imagine seeing the original productions of “Gypsy,” “Mame” and “Carousel?!”
3. I’d wish for a new president in the White House.

TN: What’s your best piece of advice for aspiring performers?

TL: Theatre is an art that doesn’t happen in a vacuum. It’s not like you’re a sculptor or a painter who can create art by himself or herself. It takes a village. Treat everyone in the collaborative process with respect, because no one job is more important than the other. The lead of the show is just as important as the person who does props or whose sole job is to sweep the stage every night.

TN: To end on a rather “Theatre Nerds-esque” note, I’m wondering if you’ve ever had a moment when you totally geeked out over a Broadway performer upon meeting them?

TL: I met Carol Channing once. I was in the presence of greatness. She was warm, charming, funny and made everyone around her feel like they were an old friend. That’s a star!

Thank you, Telly! You can catch him flying over Broadway now at the New Amsterdam Theatre in “Aladdin.”