Between 41st Street and 54th Street in New York City lie 40 of the 41 Broadway theatres. The Broadway Theatre District is the epicenter of musical theatre, the zenith of an entire art form within a 13-block radius. And, at the heart of the Theatre District is a small, 300-foot-long alley that bridges 44th Street and 45th Street between Broadway and 8th Avenue. Named for the infamous “boys from Syracuse,” the Shubert Brothers, it has been said that “in New York, the desirability of a theatre is inversely proportional to its distance from Shubert Alley.”

Let’s take a look at the history and other aspects of this legendary alley and what makes it so special:

Though it’s now a wide-open space that’s always clean and bustling with tourists and theatre folk, it was very similar to what we think of as an alley when it was first built. In 1913, the Shubert brothers opened two new theatres built back-to-back, the Shubert and the Booth. The spot they chose was right next to the legendary Astor Hotel, which had entrances on both 44th and 45th Street. As per the New York fire code of the day, an alley was needed for vehicles and equipment in case of an emergency. Miraculously, either the Shubert or their architect, Harry B. Hertz, decided to extend the beautiful artistry that adorned the theatres all the way around into the alley, rather than a plain, paved wall, as most other alleyways were at the time.

Half of the alley technically belonged to the Astor Hotel, so a fence was erected to divide them. Two gates were installed at either end, and only theatre employees were permitted entrance. However, this doesn’t mean the alley wasn’t always without commotion. In 1925, The New York Times reported on the “first ever Broadway block party” that took place in Shubert Alley, with Al Jolson himself judging the Charleston dance contest.

In 1930, the Miami Herald, seemingly straight out of a Damon Runyon story, described the alley as “having the color of one of those street scenes from a tropical revue, churning with actors, Broadway reporters, chorus girls and a soupcon of booking agents and costumers. A hurdy-gurdy grinds out tunes, and often a street band adds oom-pahs to the medley. … There is good-natured shoving about, hoots and back-patting. Stars are hailed by first name. Bootleggers are there with their order books. Also racing touts, with hot tips.”

Amazingly, in the 1930s, there was a bus depot called the “Astor Place” stop on a New Jersey bus line on Shubert Alley’s eastern side of the fence. 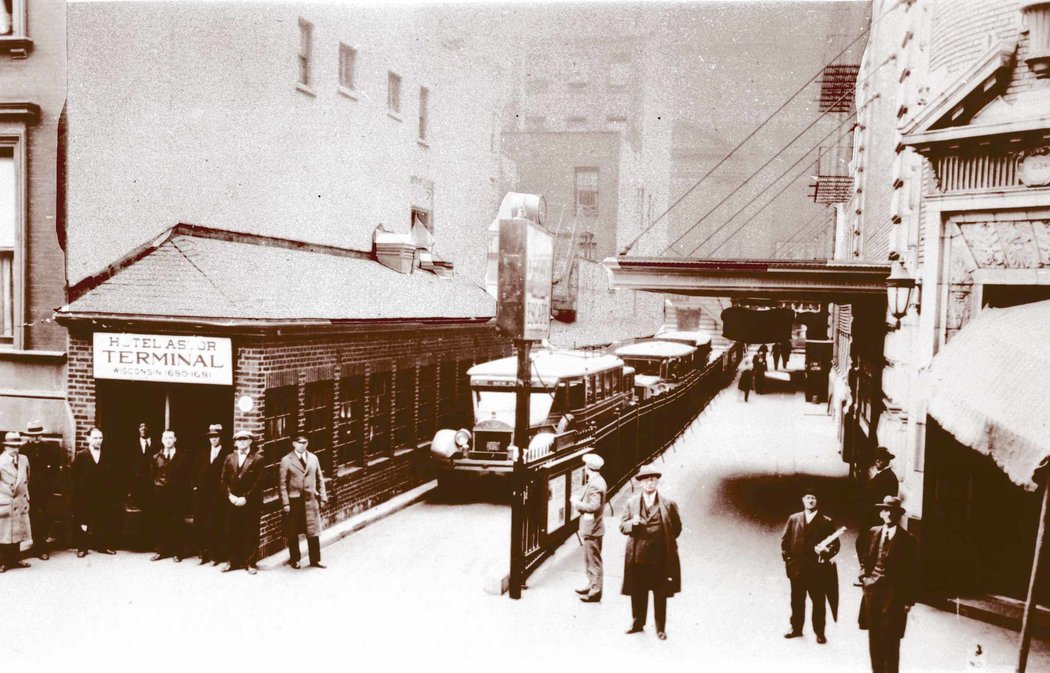 In 1949, the Shubert leased the eastern side of the alley from the Astor, removed the fence, widened the walkway by 15 feet and opened it to the public. In 1967, the Astor Hotel was demolished, and Shubert Alley was the perfect place for onlookers to watch the demolition. The office building erected in its place, One Astor Plaza, continued to lease its half of Shubert Alley to the Shuberts until it was bought outright at some point. The small, elegant stores that once adorned the street are gone. The only store there now is One Shubert Alley, a small theatrical gift shop in a converted dressing room from the Booth Theatre owned by the same people who run the Theatre Circle Shop down the block on 44th Street. 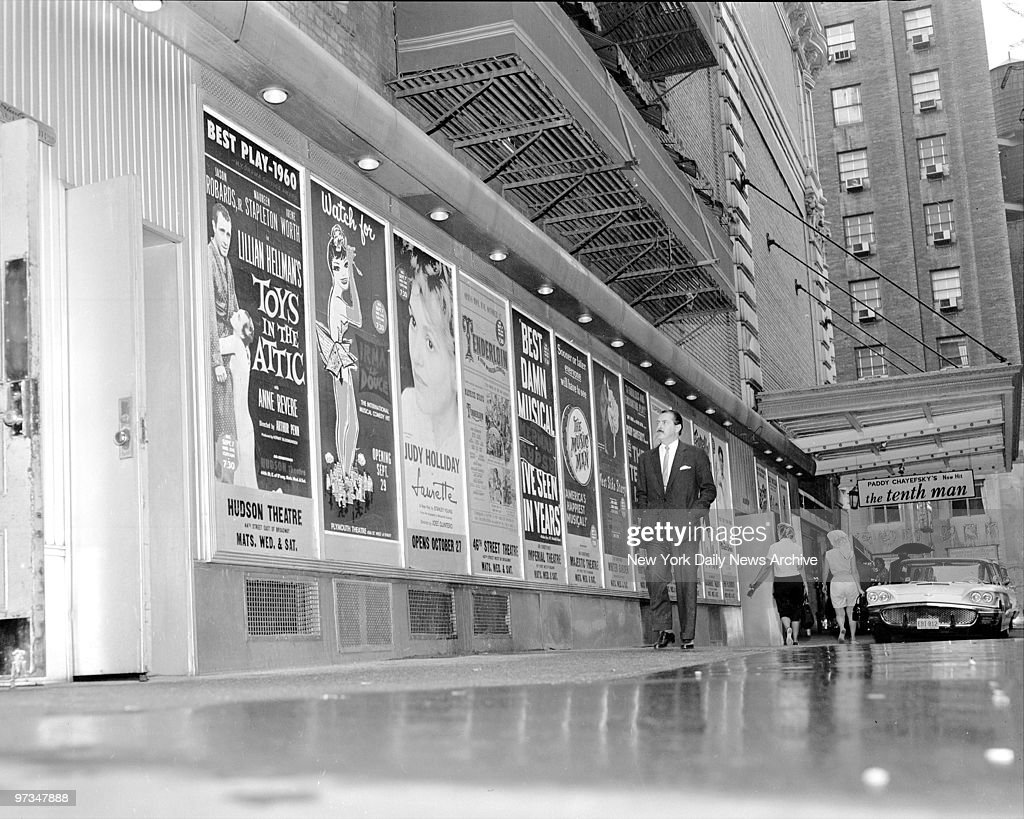 When Shubert Alley was divided with a fence, the Shuberts decided that instead of leaving the fence blank, they’d put up posters of their newest and upcoming shows. The posters were called “three sheets,” as they were three times larger than the typical one-sheet or Broadway poster known as a window card. In 1949, when the Shuberts fully took over the alley, the fence containing all the posters was removed. Luckily, the posters remained and were moved to theatre-side wall. They remain a staple of Broadway advertising.

Shubert Alley is home to some of the biggest and most loved events of each Broadway season. “Stars in the Alley,” an annual event since 1986, is a free concert presented by the Theatre League. It is usually held the same week as the Tony Awards and presents performances from hit new shows and long-running favorites.

The BC/EFA Annual Flea Market and Grand Auction encompasses not only all of Shubert Alley, but 44th Street and, as of last year, 45th Street, where shows and other theatre organizations sell props, merchandise and other Broadway-themed paraphernalia to raise money for Broadway Cares/Equity Fights AIDS.

Another fan-favorite presented annually in Shubert Alley is Broadway Barks, a charity concert, fundraiser and adoption bonanza created by Bernadette Peters and the late Mary Tyler Moore to promote the adoption of shelter animals. 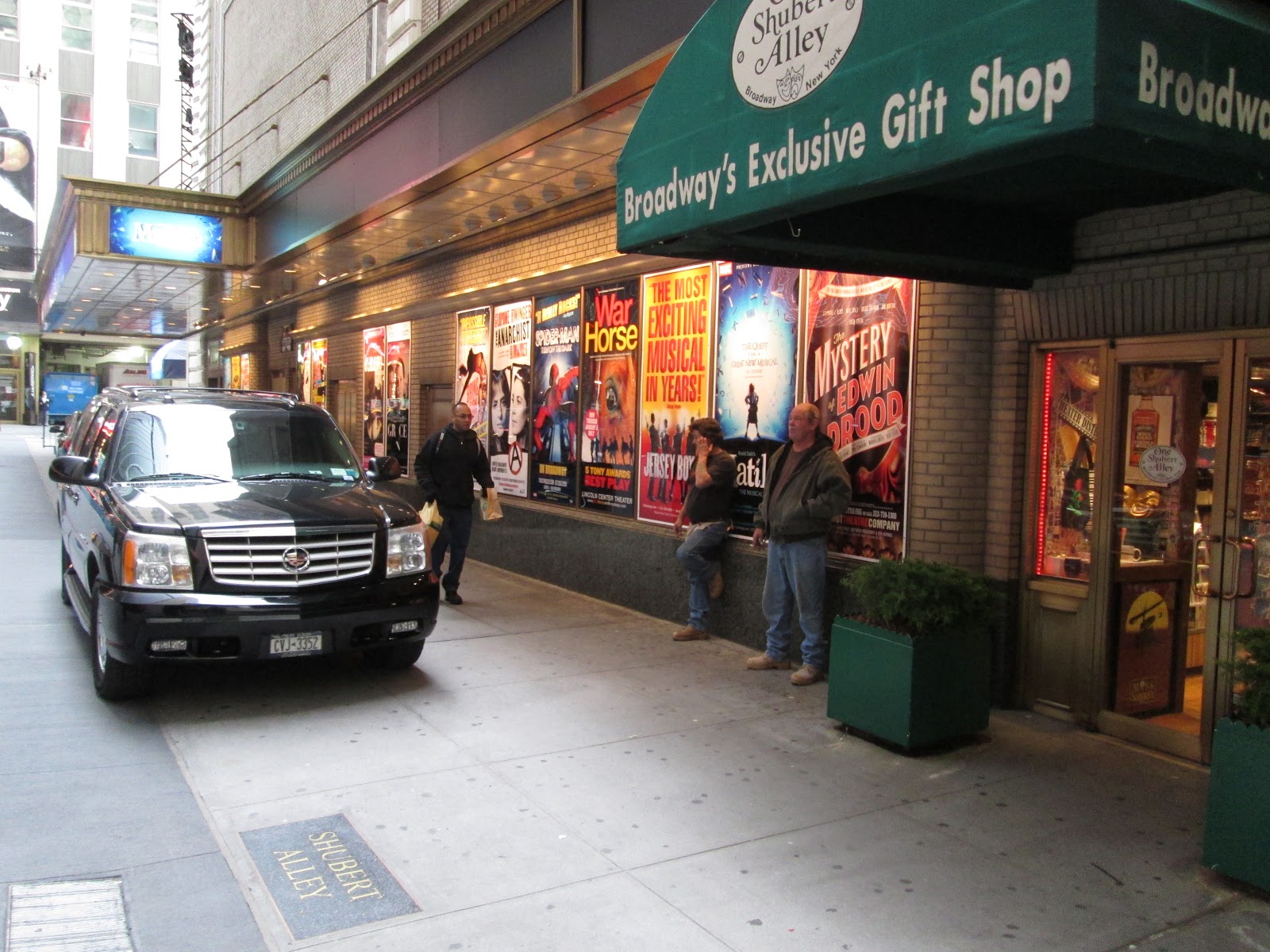 With all the major changes that have come to Shubert Alley in its more than 100-year history, only one thing has remained a constant: the best parking space in the city. The entrance to the Shubert offices lies in Shubert Alley, and the top brass get to park their cars directly in front of the alley’s entrance. This has been going on since it was built, and Lee and J.J. Shubert would have their limos parked there. This is allowed because Shubert Alley is, and always has been, private property. Indeed, if the Shuberts wanted, they could close it to the public at any time. And, once a year, they do! In order to maintain the private property status, the Shuberts must close the alley to all non-Shubert employees for 24 hours.

With the two landmark theatres’ stage doors, a Broadway gift shop, a restaurant specializing in cheesecake and a quick passageway funneling almost directly into Sardi’s, Shubert Alley was, and still is, the place to meet, greet and star-watch. In 1963, Helen Hayes best summed it up as, “a place where an actor can strut after a successful opening, and the only place in all New York to avoid after a bad one.”

What are some of your favorite theatre hot spots in NYC? Have anyplace similar in your hometown? Let us know in the comments below…