As dutiful Theatre Nerds, not even the most cynical among us should root for a Broadway show to fail. I mean, what’s the point? First of all, there’s already enough negativity in this world… And, second of all, the closing of a show puts good people out of work — not to mention all the money that it washes down the drain. Yes, sure — buying a ticket entitles you to an opinion (how loud you decide to scream that opinion is totally up to you). But, frankly, when a show doesn’t work it’s just plain sad.

Ye olde critic for the New York Times Brooks Atkinson shared a similarly sentimental sentiment. As he put it in his review for the doomed 1958 musical “Portofino,” — “There is something pathetic about a musical show that is hopeless. For the hopeless ones require as much work as those that succeed. There are just as many carnival-colored costumes; there is just as much cheerful scenery. The light cues are just as intricate, and the orchestrations as ebullient. Just as many attractive young people dance their feet off and smile as pleasantly. Everybody has rehearsed just as loyally, as if he were bound to succeed. What makes a hopeless musical show pathetic is the fact that the medium is glamorous and gay.” From there, he went on to tear the show to shreds.

Even though we can all agree it’s a bummer to watch a show tank, there is admittedly something gleeful about reading bad reviews. Blame it on the schadenfreude, I guess (wow, I spelled “schadenfreude” all by myself! Thanks, “Avenue Q.”). Most of the time, the more scathing the review, the juicier it reads —  as long as it wasn’t written about you… THIS TIME!

Here’s a small sampling of some deliciously cringeworthy snark from theatrical reviews of seasons past. Enjoy — but try not to gloat… these shows have had it hard enough already.

Far from being a source of ridiculous slap-happiness, ”Legs Diamond” is a sobering interlude of minimum-security imprisonment that may inspire you to pull out a pen and attend to long-neglected tasks, like finishing last Sunday’s crossword puzzle or balancing a checkbook.

The script is so confusing I lost its thread before the end of the first number. The unhelpful dialogue, which rarely falls trippingly from the company’s highly amplified tongues, sounds as if it had been translated from foreign-language comic books. A typical punchline? ”My girls don’t come cheap, and neither do sequins.” (Actually, these sequins look as if they do.) If there’s any mystery to ”Legs Diamond,” it is the one attending [the show’s star Peter] Allen, not the gangster he purports to play. Here is a performer with a single expression – a pop-eyed, I-dare-you-not-to-love-me grin – and a harsh singing voice as taut as his face. He delivers jokes as if he were a ”Hollywood Squares” second banana struggling with his cue cards, and his dancing amounts to a few Rockette-style high kicks and a lot of wiggling at the joints. As for Mr. Allen’s songs, they are so derivative they make Andrew Lloyd Webber’s scores sound idiosyncratic. 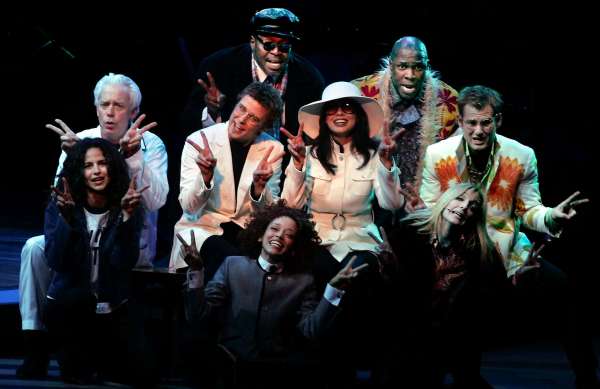 In the immortal words of Yoko Ono, “Aieeeee!” A fierce primal scream — of the kind Ms. Ono is famous for as a performance and recording artist — is surely the healthiest response to the agony of “Lennon,” the jerry-built musical shrine that opened last night at the Broadhurst Theater. 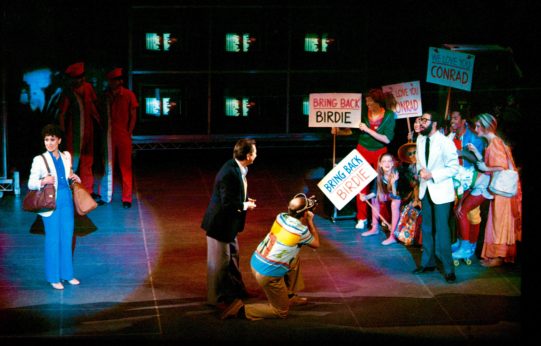 If the first ”Birdie” was invigorating, the new one is depressing right up until that curtain call. Although its creators have done plenty of fine work since their first success, you’d never guess it from this mess. ”Bring Back Birdie” is not only far inferior to its predecessor, but it is also woefully tired – as if everyone involved had abandoned hope. Instead of doing ”Bring Back Birdie,” these people should have brought back ”Bye Bye Birdie.” Or maybe they should have left their and our fond memories in peace.

Though ”Bring Back Birdie” aspires to bring back everyone’s happy youth, it has sent its creators and audience alike crashing into a gloomy middle age.

In the wake of any war come questions, dazed, wondering questions. What, finally, did we gain from fighting? What did we learn? Why did this conflict have to happen in the first place?

Perhaps, then, it is appropriate that the new musical called ”The Civil War,” whose subject is nothing less than what its grand, stark title promises, should provoke a similar litany of questions. Why are we here at the St. James Theater? What is the point in remaining for more than two hours? Why would anyone stage a show that improbably drains the drama from what is still the most fraught and painful chapter in American history?

The show arranges its archetypal elements into confoundingly static patterns, laying out all its cards in its opening minutes and then failing to combine them in ways that would build to revelation or strong emotional response. Though the musical covers the full span of the war, with the names, dates and casualty counts of major battles projected in supertitles, you eventually come to feel that you have been watching the same rotating diorama. 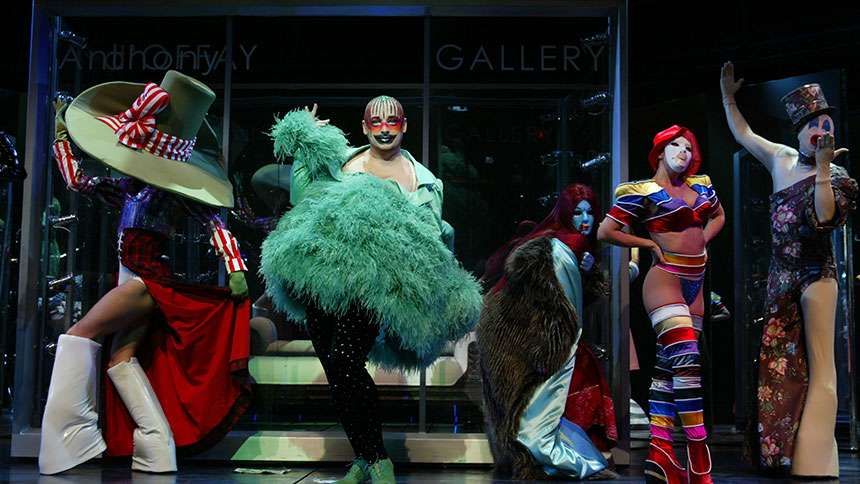 Experiencing the stultifying “Taboo,” you feel as if you could be standing on a shaky pier on the edge of theaterland, waving the SS Broadway Musical goodbye.

This sort of sensation comes on those dispiriting nights when big, new, expensive shows bearing all the telltale signs of actual entertainment — starry names, busy choreography, lighting — reveal how far the musical has strayed from traditional craftsmanship. During these peculiar events, you find yourself questioning the entire institution of Broadway, wondering whether anyone will ever again levitate an audience with imaginative songs painstakingly woven into a story of bona fide human consequence.

The feeling will pass, of course, because the regenerative impulse in your psyche guides you to the memory of a recent success like “Avenue Q,” a witty, melodious sendup of urban mores and post-graduation angst. But still, Broadway continues to shelter hokum like “Taboo,” a production with such an acute case of meaning-deprivation that you almost forget what’s happening as it’s happening.

The wasted actors — as in misused — include the estimable Raul Esparza, playing a cross-dressing London club promoter who narrates this musical-in-flashback. Esparza is so fired-up here you want the stagehands to keep him away from matches; he’s a combustible presence, but if the performance were any more intense, it could embarrass even Mandy Patinkin. 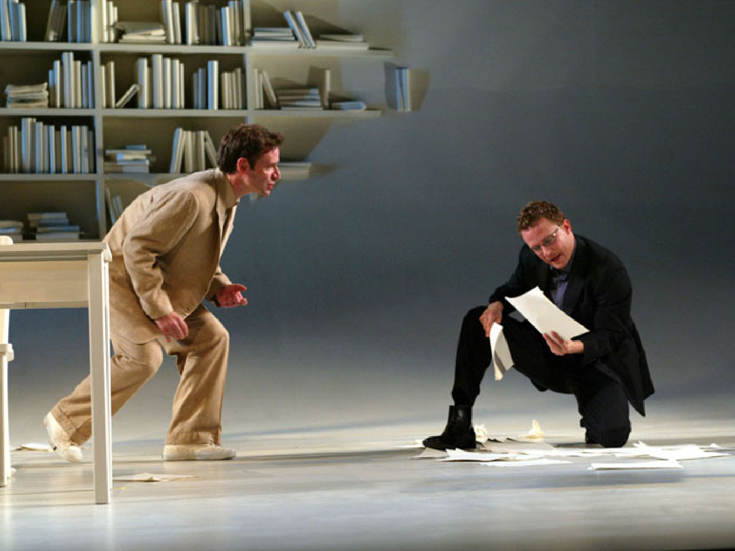 “The Story of My Life” is a two-man musical with a dual personality. Half of Brian Hill and Neil Bartram’s well-meaning piece examines the tension between memory and fiction, as seen through the lives of two men with a knack for verbose self-reflection; the other half is a collage of cultural platitudes about butterflies, angels and snowflakes. The show can’t decide if it wants to be Stephen Sondheim or a gift shop in Topeka.

“The Story of My Life” needs fewer stories and more life. It is hard to imagine that this snowflake of a show will survive in the Broadway drift: It has wings, but it doesn’t have a prayer.

In addition to jettisoning the usual excesses of tourist-trapping extravaganzas, they have tossed away such niceties as originality, credibility, tension and excitement. I don’t think it’s spoiling anything to tell you that [Malcolm] Gets’s character is dead when the show begins. So, for all practical purposes, is “The Story of My Life.”

And as directed by [Richard] Maltby, [actor Will] Chase (of “Lennon” and “High Fidelity”) and Mr. Gets (a Tony nominee for “Amour”) sing and act with winning (and, under the circumstances, merciful) restraint. It is to their infinite credit that even when they’re extolling the precious glories of snow angels and a butterfly’s wings, you don’t feel like punching them in the face. 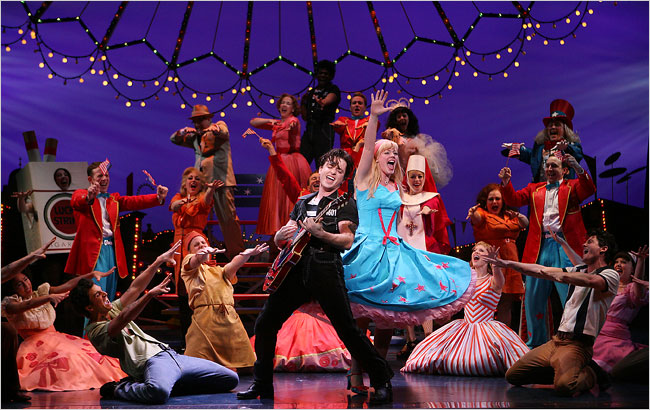 There’s no delicate way of putting this. Cry-Baby is … tasteless. … When I said “tasteless,” I meant without flavor: sweet, sour, salty, putrid or otherwise. This show in search of an identity has all the saliva-stirring properties of week-old pre-chewed gum.

The music comes in two rocky flavors — cheery and droopy. It’s the kind of music that makes you wonder whether you’ve heard it before, just before you stop caring.

Opportunity knocked last night at the door of the Marquis Theatre, where Cry-Baby is making its Broadway debut. But nobody answered. 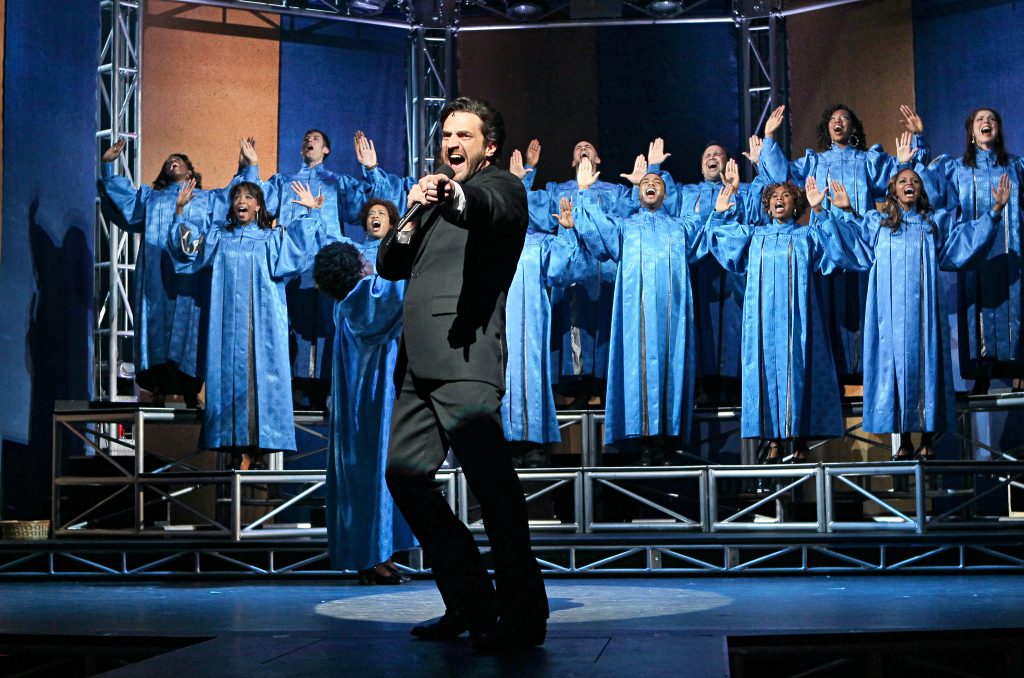 Want to make a ton of money? Peddle God to fools. Want to lose a ton of money? Invest in a Broadway turkey. You can’t have it both ways. It’s perfectly fine—even desirable—if your religion is crude and nonsensical, but a show as bland and confused as “Leap of Faith” is not going to make rich men of its producers (among whom are actual church leaders). The fake cash distributed by actors to audience members—so we may place it in the offertory baskets at Jonas Nightingale’s revivalist hoedowns—is all the green this wanly tacky production is likely to see. 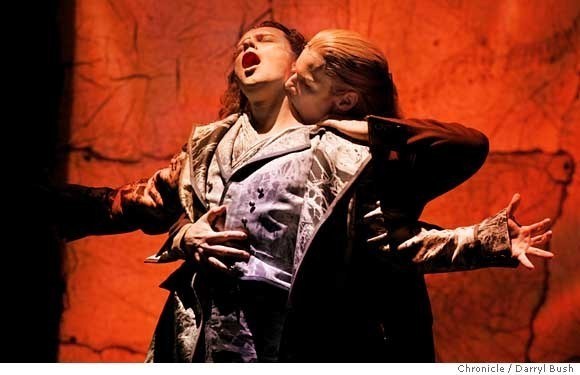 A promising new contender has arrived in a crowded pharmaceutical field. Joining the ranks of Ambien, Lunesta, Sonata and other prescription lullaby drugs is “Lestat,” the musical sleeping pill that opened last night at the Palace Theater. Dare to look upon “Lestat” and keep your eyelids from growing heavier and heavier. 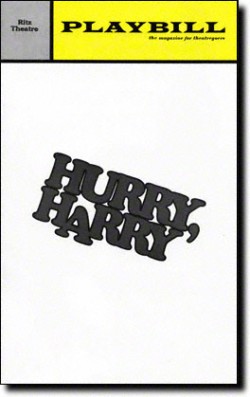 Muggings, massage parlors and disasters such as “Hurry, Harry” have all conspired to give Broadway a bad name. It is so feeble that even its opening is I suppose worthy of congratulation — lesser men would have given up in the face of the inevitable. But the producer, Peter Grad, and the three people who wrote the book, the man who wrote the music, and the man who wrote the lyrics fought on in spite of everything.

It is sad when this kind of thing happens– sad for the backers, sad for the people who worked for it, sad for the critics forced to pan it. The critic in such circumstances is a particular innocent. Halfway through he is tempted in a paranoid fashion to wonder: “What did I ever do to you guys that you have to give me such a rotten night?’ Oh, well!” 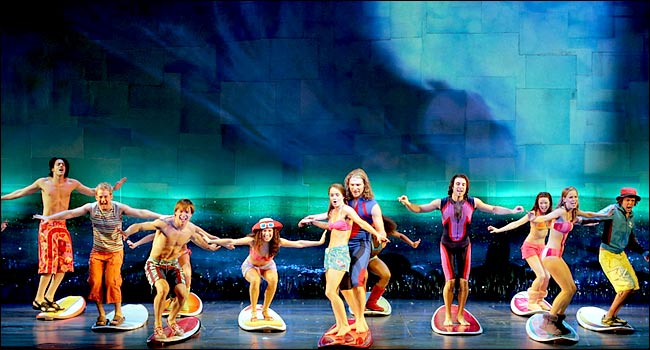 Even those who believe everything on this planet is here for a purpose may at first have trouble justifying the existence of “Good Vibrations,” the singing headache that opened last night at the Eugene O’Neill Theater.

But audience members strong enough to sit through this rickety jukebox of a show, which manages to purge all catchiness from the surpassingly catchy hits of the Beach Boys, will discover that the production does have a reason to be, and a noble one: “Good Vibrations” sacrifices itself, night after night and with considerable anguish, to make all other musicals on Broadway look good. 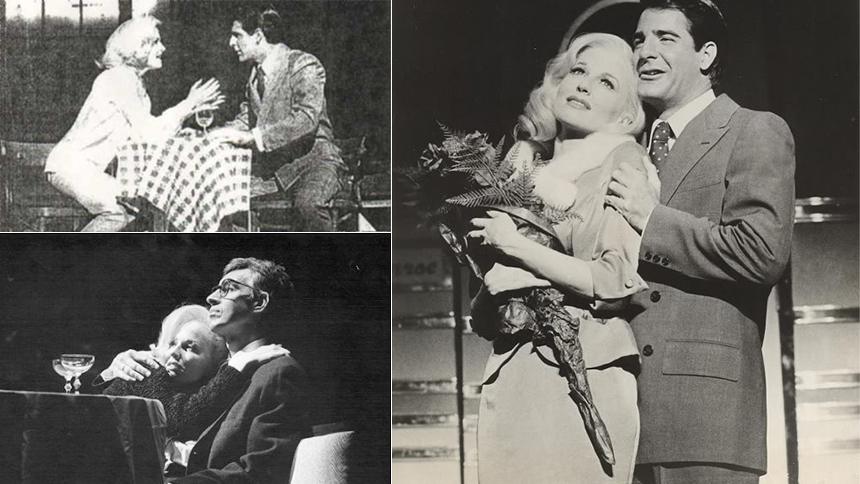 If you read all the fine print in the Playbill for ”Marilyn: An American Fable,” you’ll discover that the new musical at the Minskoff has 16 producers and 10 songwriters. If you mistakenly look up from the Playbill to watch the show itself, you may wonder whether those 26 persons were ever in the same rehearsal room – or even the same city – at the same time. On top of its many other failings, ”Marilyn” is incoherent to the point of being loony. I defy anyone to explain – just for starters – why 10 chorus boys dressed in pink plumbers’ costumes sing a song about bubble baths at the climax of Act II.

Jeremy Scott Blaustein is a Drama Desk and Outer Critics’ Circle Award-nominated Broadway Producer, a Helen Hayes Award-nominated Actor, and a published novelist and historian. His work as a director has been seen by tens-of-thousands. For more info, please visit www.jblaustein.com