Over the years, movies such as “The Producers” and TV shows such as “Smash” have shared the common trope of the fictional musical. Certain nonexistent stage musicals have been lucky enough to get their own concert production, while others are still awaiting their own moment in the spotlight.
Here are 15 fictional musicals we think deserve their own full-length stage production:

In the credits of “Monsters, Inc.,” Mike, Sully and the whole company reenact the movie’s story as a musical. It’s quite the scream!

In the series’ sixth season, Bette Midler guest-stars to perform in the musical “Rochelle, Rochelle.” After George accidentally injures her in a softball game, her understudy, Gennice, performs in her place. The episode is partially inspired by the Nancy Kerrigan incident.

3. ‘Influenza: The Musical’ from ‘Even Stevens’

This episode documents Ren’s bizarre school day as she suffers from the flu while trying to keep her perfect attendance record.

4. ‘Eliza Rocks!’ from ‘Confessions of a Teenage Drama Queen’

The level of cringe in Joey Tribbiani’s musical about the famous neurologist leaves room for its own psychoanalysis.

The musical-within-a-musical contains gems such as “Bop to the Top” and “Breaking Free.”

This one-of-a-kind episode in the series is about the famed boy genius’ birth and how he created his laboratory.

8. ‘The Nightman Cometh’ from ‘It’s Always Sunny in Philadelphia’

The season four finale features Charlie Kelly writing a musical and casting the main characters in it as an attempt to propose to the Waitress.

In the fourth season, Marge plays Blanche DuBois in a local musical version of “A Streetcar Named Desire,” complete with some controversial lyrics about New Orleans.

Penny and her crush, Kwok, star as Juliet and Romeo in their school play and add a hip-hop twist to the final scene.

The third season features a musical number that Gene writes about Thomas Edison and the electrocution of Topsy the Elephant.

12. ‘Snow White and the Seven Dorks’ from ‘Saved by the Bell’ 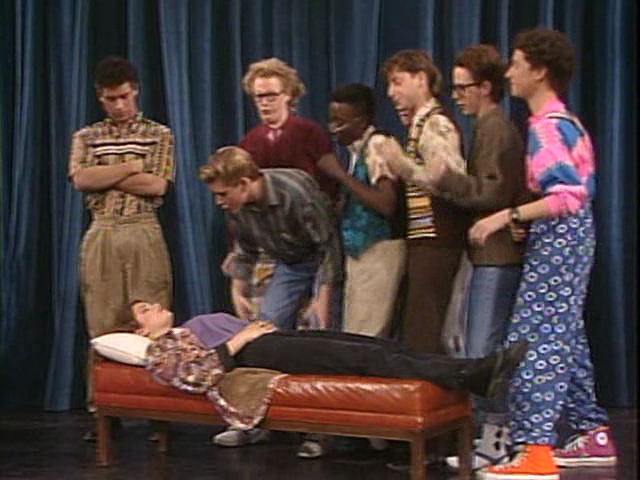 Similarly to aforementioned “Proud Family” episode, the main characters of “Saved By the Bell” make a hip-hop version of “Snow White and the Seven Dwarfs.”

Cartman decides to turn Helen Keller’s life story into a musical, with professional actor Jeffrey Maynard surprising everyone by playing the late author-activist herself.

14. ’The Deo Variety Hour’ from ‘Foster’s Home for Imaginary Friends’

The Hollywood agent Kip Snip turns Bloo into the new face of Deo, a deodorant brand. However, Bloo sneaks his qualms with Snip into the lyrics of the songs he performs.

Mr. G., a flamboyant and egocentric drama teacher, turns his life story (and a student’s drug overdose) into a musical spectacular.

Did we leave out your favorite fictional musical? Let us know in the comments below…