I know we’d all like to think that the director has a rather cushy position in a production. I mean, they don’t make anything, they don’t perform and they don’t run the show — all they really do is show up and tell everyone else to do. Right? They have all the power.

By now, all the directors reading this are like:

Well, consider this: For a person with so much power, directors have surprisingly little control. It’s this fact that will ultimately drive any director a little crazy.

You see, a good director approaches each project with a vision and master plan. In their minds, they create an ideal idea upon which the entire show is based.

Directors surround themselves with helpers to create this vision. The designers take the idea and make it a reality, the stage manager keeps everyone on time, on task and on spot, the actors bring it to life and the crew puts in the hard labor to make it all happen.

Directors work with all of them and do their best to get what is in their head out onto the stage. And, they are on the lookout for people who will do the same. But, it’s a competitive world out there. What can you do to prove you’re the best person for the job? How are you going to stand out?

The following are five things you can do to impress your director and help bring their vision of the show to life:

1. Focus, Pay Attention and Listen Up!

This one is kind of obvious, but there’s a reason why it’s No. 1: It’s what all directors want more than anything else in the world, and yet it seems to be the hardest for people to abide by.

A director’s job is to communicate their vision, and they do this by talking a bit. Okay, a lot. We mean a lot. We’ve all been stuck in a post-rehearsal notes session a little before midnight, listening to our director give a full page of notes for every single scene in the play. Inside, we’re all just praying for them to shut up.

However, a good director will never give up on that vision and will therefore talk until they die if that means they’ll be able to get you to heed what they say. You might as well make peace with it and stop talking during notes. Who knows? It may even mean you get out of rehearsal at a (relatively) reasonable hour.

Your director depends on you to do a lot of things, such as be on time, learn your lines and remember your blocking. However, there are many lesser-known things your director needs from you that you may not have thought of.

First of all, read the play. Not just your scenes, not just your part — the whole thing. The readthrough should not be the first time everyone reads the play. I’m not saying you need to have all your lines memorized, but you should come to that first get-together with a general knowledge of the show and your part.

Next, come with ideas of your own. Whether you’re an actor or a techie, it’s important for you to be passionate about working on the show, and that can only happen when you’re invested in it. In the end, it’s obviously the director’s show and sometimes they have to say “no” to keep the production consistent with their vision, but most of the time, they want to give you the freedom to make suggestions. Believe it or not, a director’s favorite word is not “No.”

Last, do your research. Look up the things you don’t understand. Get yourself acquainted with the play, the world it depicts, the history of it and your role in it. Don’t be caught being the one person in the group who is constantly saying, “I don’t know.” 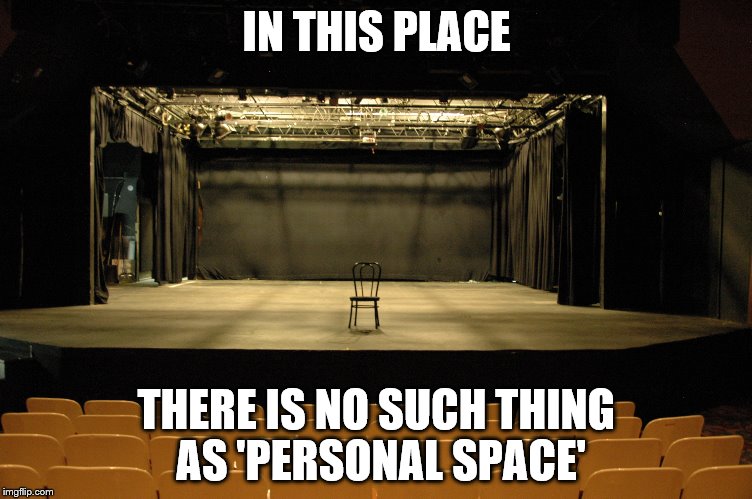 Personal space just doesn’t work in theatre. We’re not just talking about physical space, which you can expect will be intruded upon immediately upon meeting the costume crew and their endless supply of measuring tape. We’re also talking about intellectual and emotional space.

There should be a disclaimer on every audition sheet that reads, “This show contains emotions and, if cast, you will be expected to connect. Can you do this? Check yes or no.”

Good theatre is visceral. It’s intimate. It’s personal. You cannot have a great show if you aren’t committed to that. You have to let your guard down and let people in. You have to share your feelings and connect with the material and the other people you are working with. As a natural introvert, I can totally understand how hard it can be to tear down those inner walls. But once you do, you’ll find a power within yourself that you never knew you had. You will get rave reviews, the admiration of your peers and the deepest respect of your director.

4. It’s All About the Sound

Directors are quite obsessed with sound — mostly your sounds. However, it all comes down to this simplest of directions: Be quiet backstage and be loud onstage.

So, when you’re offstage, you need to learn to do a special backstage tiptoe walk. Heels and tap shoes should stay off your feet until just before your cue to enter. You have to learn to communicate by reading lips and gesticulating wildly. It’s the quietest — and most intense — game of charades you’ll ever play in your life. If you feel a sneeze or cough coming on, run like the dickens (quietly, of course) to the dressing room to let it out.

Onstage is entirely different. When you’re onstage, the director never seems to hear you, unless you don’t want them to. It’s something about the acoustics.

According to a great professor I once had, the following are the three rules of elocution:

This last one got drilled into me in college and has now become the thing I notice the most in actors I work with. Our natural speech tends to be a bit of a rollercoaster. We always end on a downward slope, which means we drop off the last word of our sentences. This is what will leave the audience confused and wondering, “Huh? What did they say?”

Also, many directors will want to avoid using microphones in a small space, since they are notoriously unreliable. Learn to project (not scream), and you’ll have the admiration of your sound crew everywhere.

I know this seems like a strange one, especially because so many people think this is all we do in theatre anyways. However, so often in the process of the show, we get so focused on getting things done that we forget to play. And playing is very important, as it is both a tool and a way to learn.

So, do it. Put yourself out there. Try new things. You never know when your director will leap out of their seat and yell, “I love it! Keep it!”

Directors, don’t forget to encourage this, too. It promotes participation and trust, keeps everyone on their toes and ensures people are invested. Most importantly, it makes rehearsals more relaxed and fun, which is why everyone participates in this in the first place.

By keeping these five things in mind, you can make your director love you — and you want your director to love you. Most directors tend to be very loyal and like working with people they know and trust. Essentially, theatre is a big gamble. No one wants to fail, so directors make safe bets by getting the best people on board. Once you’ve proven to a director that you are a tried-and-true talent, you can make your own bets that you will be one of the first people they turn to.

Are you a director? What other things can actors do to impress? Leave a reply below…