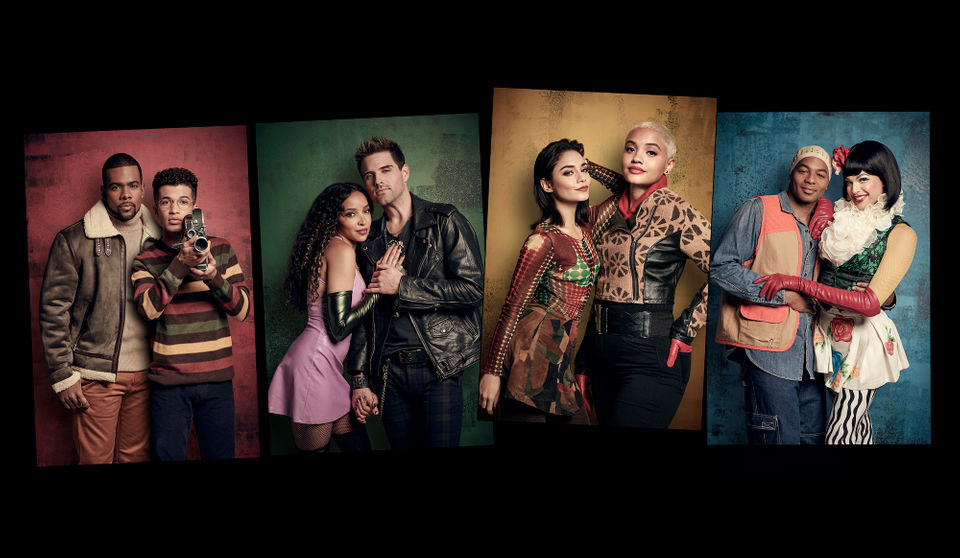 On Sunday, January 27th, 2019, the much anticipated “Rent Live” aired on Fox. “Rent” is the latest in a long line of televised “live” musicals appearing on network television starring new casts. Others in this vein include: “The Sound of Music,” “Grease,” “Hairspray,” and “Jesus Christ Superstar.””Rent” is an updated version of the famous opera “La Bohème,” by Puccini, and tells the story of a group of artists living in New York’s Alphabet City during the height of the AIDS pandemic. It was released in 1996, at a time when the show’s inclusion of gay, bi, and cross dressing characters were not shown in the mainstream, as well as the AIDS crisis and the issue of drug addiction. The show’s writer, Jonathan Larson, tragically died on the night of the final dress rehearsal, but his show has graced Broadway stage for 12 years in its original run, as well as several national and international tours, productions in Mexico,  London, and France, and a short revival off-Broadway in 2011. A feature film was released in 2005, starring all of the original cast members: Anthony Rapp, Adam Pascal, Jessie L. Martin, Wilson Jermaine Heredia, Idina Menzel, and Taye Diggs, as well as welcoming new stars Rosario Dawson and Tracie Thoms.While the televised version of “Rent” received the lowest viewership of all the live musical renditions, that is not to suggest that it was not good. I’ve been a fan of the show since the movie came out; I’ve seen it live three times, I know the soundtrack by heart, and I have to admit that while I was excited at the prospect of a new filmed version of my beloved show,  I was hesitant about the cast and how it would survive on Fox networks. I was surprised when I saw the track listing for the soundtrack and saw that racy songs like “Contact” were included. 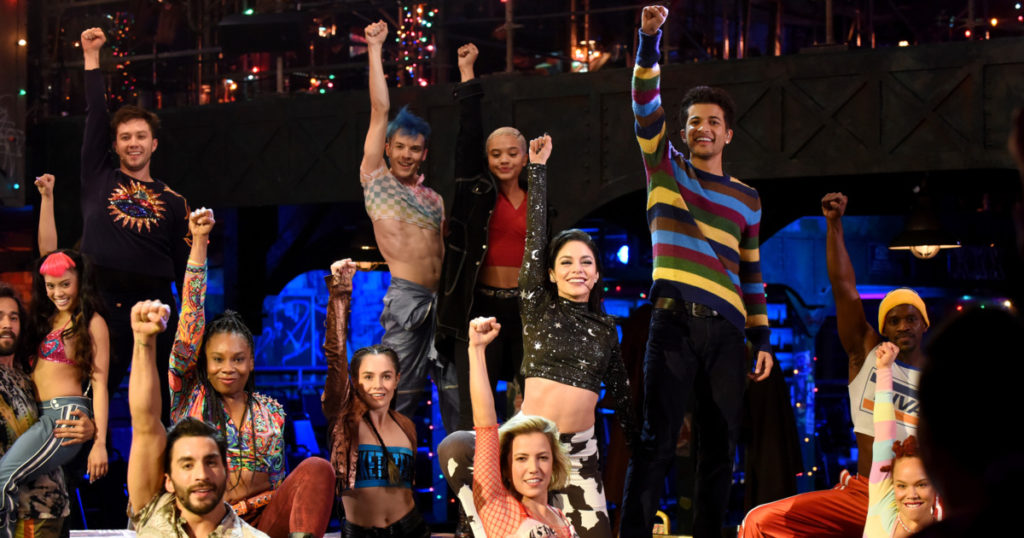 I was not able to watch it on the night it aired, due to work, but I have a friend who sent me clips of Tinashe’s rendition of “Out Tonight” Mimi–the S & M dancer burdened with HIV and a heroin addiction, is my favorite character in the show, and “Out Tonight” is my absolute favorite song. I watched the Snapchat videos, anxiously. I am very protective and particular about the character and song, and I had my reservations about Tinashe. She is incredibly talented, don’t get me wrong, but I wasn’t sure that she had the pipes to pull off the iconic song. I was pleasantly surprised when I saw her performance in its sexy and raw glory. After that one clip, I was sold.I didn’t get to watch the full show until today, but I had already heard that fans felt slighted that the televised version wasn’t “live.” Not true. Actor Brennin Hunt (Roger) injured his foot and was told that he would be unavailable to perform on show night; the entire cast and crew were faced with a dilemma. There were no understudies and they didn’t want to cancel the show until his foot was healed, so, in true “Rent” fashion, the show went on, much as it did on that final dress rehearsal, the night that Jonathan Larson died. The version that was aired on TV was the pro-shot dress rehearsal, with the exception of the last 10 minutes or so. The cast did perform on show night, but in a stripped down, concert style, as opposed to the full-blown show, as planned. 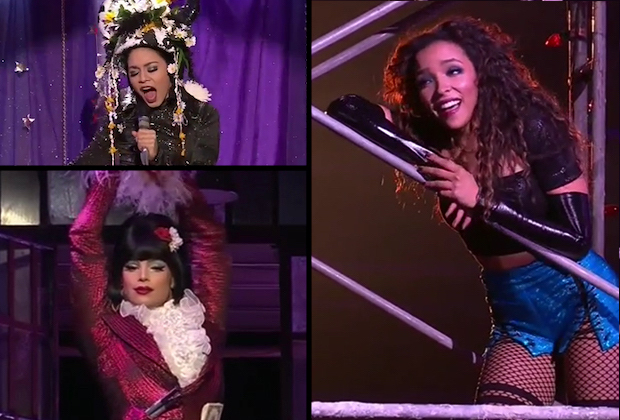 This version of “Rent” differed slightly from previous incarnations.The most notable change is that Mark this production is not white, as he has always been. Actor Jordan Fisher brought a new likeability to the character that no other actor has done, at least, not for me. “Rent” has always been an inclusive show, with 5 of the 8 original cast members being non-white. The costumes were changed slightly: Mimi’s signature blue pants were reworked into a short blue skirt, Angel’s Santa Claus dress was lengthened and included a train, Maureen sported cow print pants for her ridiculous “Over the Moon” performance, and, of course, the signature Mark sweater was redesigned from red and blue to red, brown, green, yellow, and blue. The original Mark sweater did appear, however, during the “Christmas Bells” number when Angel and Collins are shopping for a new coat; the vendor displays it, but Angel declines.As well as costume changes, the show also had edited lyrics, which I didn’t mind. There were some casual lyrics changes throughout the show that I thought were nice, and some songs that were shortened, namely the voicemails. The biggest changes were the new, more involved sets and the added dialogue, as well as the included focus on the Life Support group and their message. 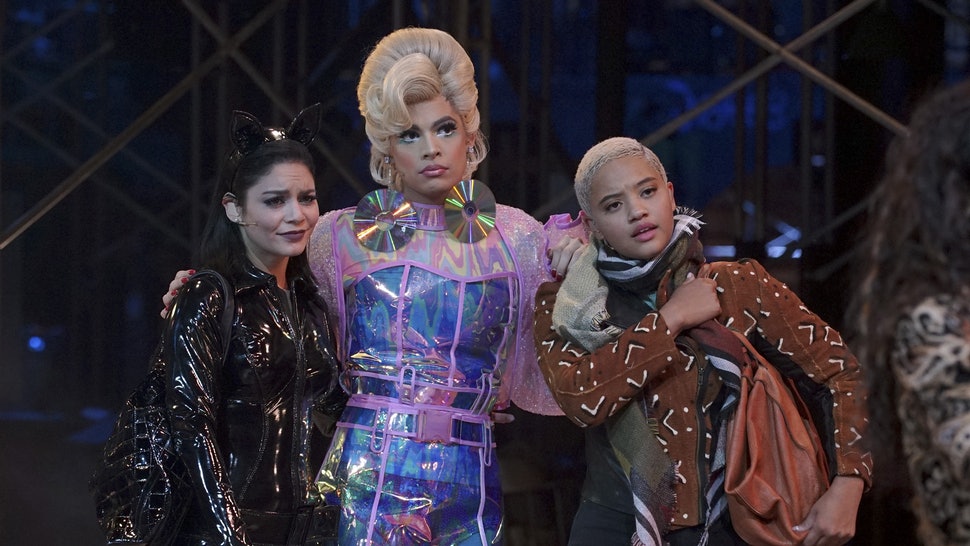 The Broadway production of “Rent” featured a simplistic set of a few tables, and the railing on which Mimi dances seductively during “Out Tonight.” The new production featured hardwood flooring, beds, an actual motorcycle, and multi level set, where we get to see glimpses of Mimi’s apartment.There is a new scene just before “I’ll Cover You,” the love song between gay HIV+ professor, Tom Collins, and drag queen–also HIV+–Angel Dumot Schunard. The added dialogue sees Angel asking Collins about her new outfit and proclaiming that this new costume is more “her.” This new production did away with the notion of Angel as a cross dresser, and passed her off more as transgender.Other new scenes include extra bits with the Life Support meetings and their message of love and acceptance, as well as more authentic make up for the AIDS stricken characters.One scene in particular that I found genius was just before Mimi and Roger’s tragic “Without You” number, where Mimi comes home late (out buying drugs) and Roger accuses her of cheating with Benny, their landlord and ex-friend; Roger coughs and Mimi asks if he’s okay. That was not in the original production, nor any other that I have seen. Then, during the musical beds portion of the song, Roger gets into Angel’s vacated hospital bed–complete with IVs. Whether this was to indicate that Roger had an AIDS scare and was hospitalized, or just a way to reuse a set piece without overcrowding the stage, I’m not sure, but regardless, I thought it was a nice addition, as well as Mark’s narration that Angel had been hospitalized most of the winter. “Contact” the song in which the main characters all have sex with their respective partners (except Mark, who is masturbating) plays out much like it normally does on stage, with the exception of a near-death Angel seeming to revived and revitalized by the orgy on stage, only to die. This version of the song was more cybernetic and mechanical than previous versions, but I thought it worked well. 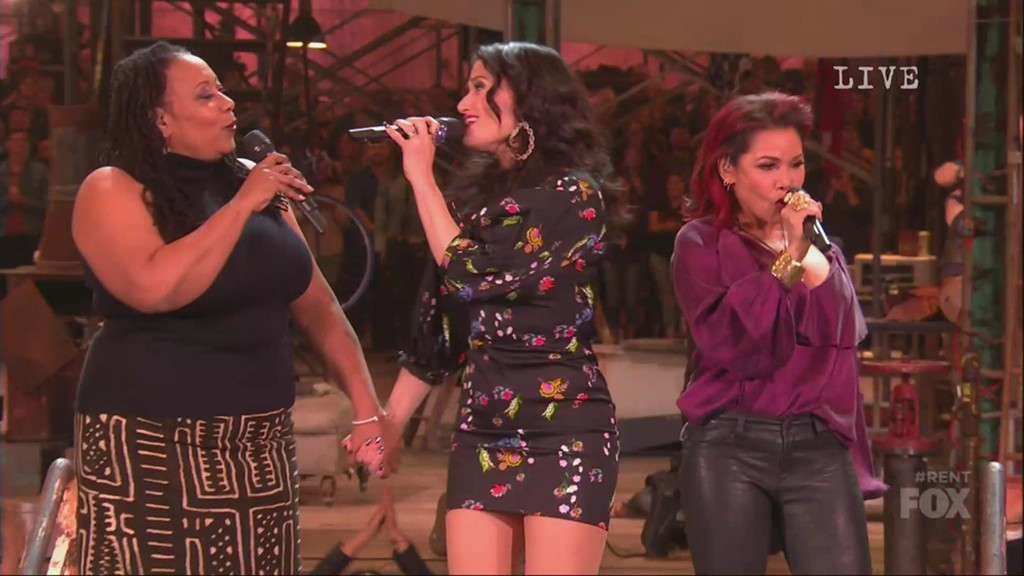 While the show may have garnered lower rating than hoped, I don’t feel that this is reflection on the show itself. The vocals were not perfect, but these imperfections added to the rawness of the show and made it more believable. The core message of the show — No Day But Today — is just as poignant now, as it was 22 years ago, as is the theme of acceptance, no matter someone’s ethnicity, sexual orientation, or station in life.  This show means the world to me, and I am proud that it’s legacy and integrity were upheld. Hopefully a new generation of fans have now been spawned, and this show will never go unheard.