I love everything about Wicked, from the spectacular music and stage design to the hilarious one-liners. Universal Pictures confirmed that it will produce the long-anticipated film version of the hit Broadway musical Wicked for 2019. This film version has been in development hell this whole decade. However, thanks to Les Miserables (2012), Into the Woods (2015), the NBC musical specials, and more recently Hamilton, there is now greater momentum for a Wicked movie. For years, fans of Wicked have dominated social media with fan-fiction, storyboards, and casting predictions. Here are six things that we want to see for the film adaptation of Wicked. 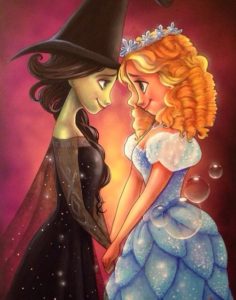 Although several fans have anticipated the movie to be live action, how cool would it be to see a fully or partially animated Wicked film?! One of the great things about animation is that it enhances excitement and emotion that would be impossible to capture in the live-action format. Animation would also bring out more depth to the visual effects, especially in scenes that would require a green screen. With the development of several fan-made storyboards for various scenes, anything seems possible for this film to be animated.

Idina Menzel and Kristin Chenoweth won the worlds’ hearts as the dynamic duo of Elphaba and Glinda. While the two actresses have left their mark as part of the Original Broadway Cast, Menzel and Chenoweth will be too old to reprise their roles if the film is live action. However, there is always the possibility for them to make cameos, whether as a Munchkin, a Flying Monkey, or as a parent to Elphaba or Glinda.

Stephen Schwartz has established himself as a force to be reckoned with, writing music for original Broadway shows as well as for Disney films. The soundtracks for the film versions of The Phantom of the Opera and Evita each included a new song written by Andrew Lloyd Webber. Likewise, the producers should consider Schwartz adding a new song for the movie, particularly one that would expand character development.

4. A Mix of Broadway and Hollywood Figures.

One of the reasons why the Les Miserables movie was successful was because of its casting. The film joined Hollywood figures such as Amanda Seyfried and Anne Hathaway with Broadway stars such as Aaron Tveit and Colm Wilkinson. Doing the same with the Wicked movie will excite Broadway fans as well as those who are not as familiar with the musical. With the vast selection of sopranos and belters in the music industry, the casting choices are plentiful.

While Gregory Maguire’s novel Wicked dedicates the whole first part to Elphaba’s childhood, the musical Wicked only briefly references the witch’s youth. I would love for the film’s writers to include passages from the novel to form a more solid backstory for not only Elphaba, but also for Glinda and other characters.

Instead of recording the music and then lip-syncing to it during filming, the Les Miserables film had their performers sing on set with earpieces of the piano accompaniment. I loved this method because it is easier to see the actors’ emotions when they are actually singing live. With the right singers and arrangements, the method should work perfectly for the Wicked film.

Agree or disagree? What do you want to see in the Wicked Movie? Leave a reply below…