As a middle schooler of the early 2010’s, there were a lot of post-apocalyptic and dystopian media being released after the Harry Potter movies ended. My favorite from the Dystopian YA genre is The Hunger Games. In 7th grade, I was in a bit of a literature slump as I finished the Harry Potter series. I picked up the first Hunger Games book because my friends were talking about the movie that was going to be released before spring break. They kept on telling me how good of a book it was and they were right. The setting felt so real because of my background in camping and martial arts. I could hear the sounds of the woods and I knew the feeling of wielding a sword. It’s been a while since I’ve read the books but over this last week I was rewatching the movies again and thought to myself, Could this be adapted for the stage? 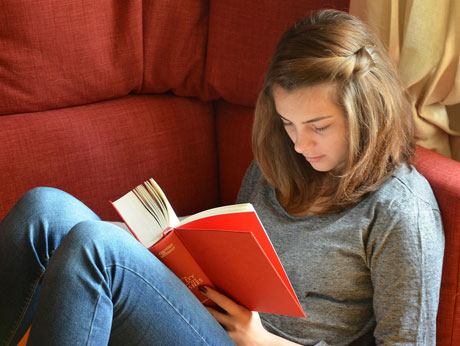 Right now on Broadway, there is a trend of adapting a movie or a popular series to the stage. Mean Girls, Pretty Woman, Waitress, Anastasia, Harry Potter and the Cursed Child are just a few. And in the recent years we’ve seen stage adaptations of 1984, Fahrenheit 451, A Clockwork Orange, and A Brave New World. So should The Hunger Games be brought to Broadway?

The author of The Hunger Games, Suzanne Collins, wrote her books in a three-act format and has a background in playwrighting. So when adapting it to the stage, each chapter is or two is like a scene and there is also that whole theatrical arc. Also, this story is based on the myth of Theseus and the Minotaur and it wouldn’t be the first time audiences have been exposed to Greek Mythology since Theatre comes from the ancient Greeks. Plot-wise, The Hunger Games flows like a play. 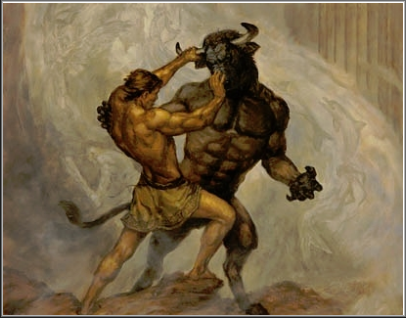 The books are written from Katniss’s perspective, the audience sees everything that she sees. We are with Katniss in the arena and we are in her head as she monologues. It made sense in the movies that we see things from the Gamemakers and the world outside of the arena because it fit the medium of film. In a stage adaptation, we don’t have to see everything that is being planned before it happens in the games which would let the audience be surprised by certain things instead of being told what is going to happen.

The Hunger Games breaks gender stereotypes. Katniss is blunt and a bit emotionally inept. She hides what she is feeling. Peeta, on the other hand, is sweet, gentle and openly expresses himself. How many pairs can you name that have swapped stereotypes? Plus this isn’t a teen love story. It’s a story about survival and justice. I would love to see an actress play an honest portrayal of an introverted  and tough as nails rebel.

Going over to design elements, The Capitol Citizens have very theatrical and elaborate outfits. The hair and make up of the Capitol would be very interesting to see onstage. Cinna’s costumes with the fake fire could become a reality with the right technology. We’ve already figured out how to transform one dress into another if you have seen Cinderella.

Then we see the District citizens who dress very simply. Think of something like Of Mice and Men, or a standard 1930’s period piece. Costuming for The Hunger Games would be very interesting to see blending ideas from The Great Depression, New York Fashion Week, and Survival Gear. 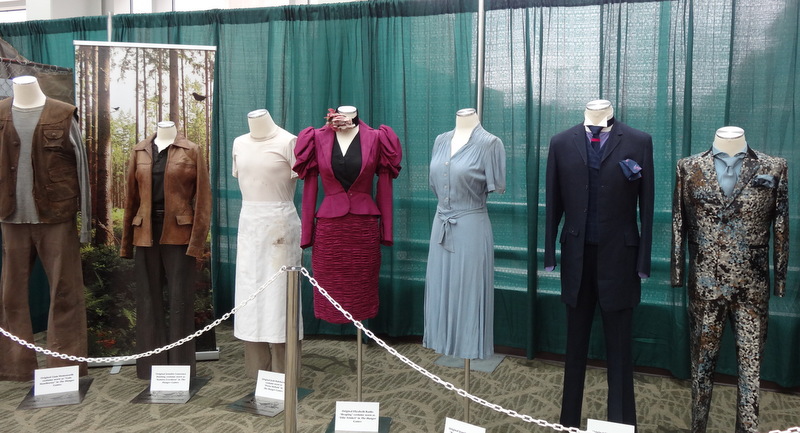 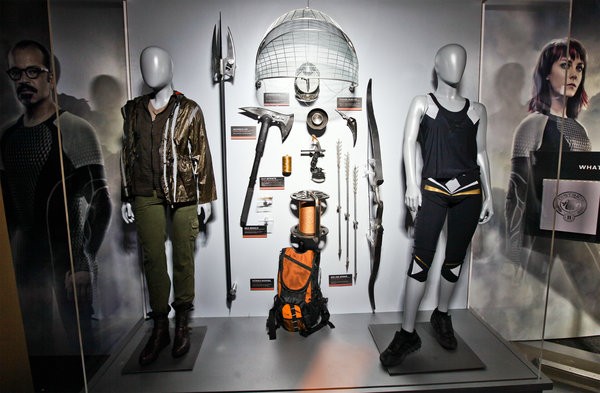 With the tech advancement of digital screens, creating those elaborate metropolis, war torn buildings, or outdoor scenes are a lot easier to do now than five years ago. Imagine seeing those sweeping fields beyond the fence of District 12 or even the Training Center before the games. Now imagine the scene with the interviews with Caesar Flickerman with you the audience as the Capitol audience members. Wouldn’t that be interesting? 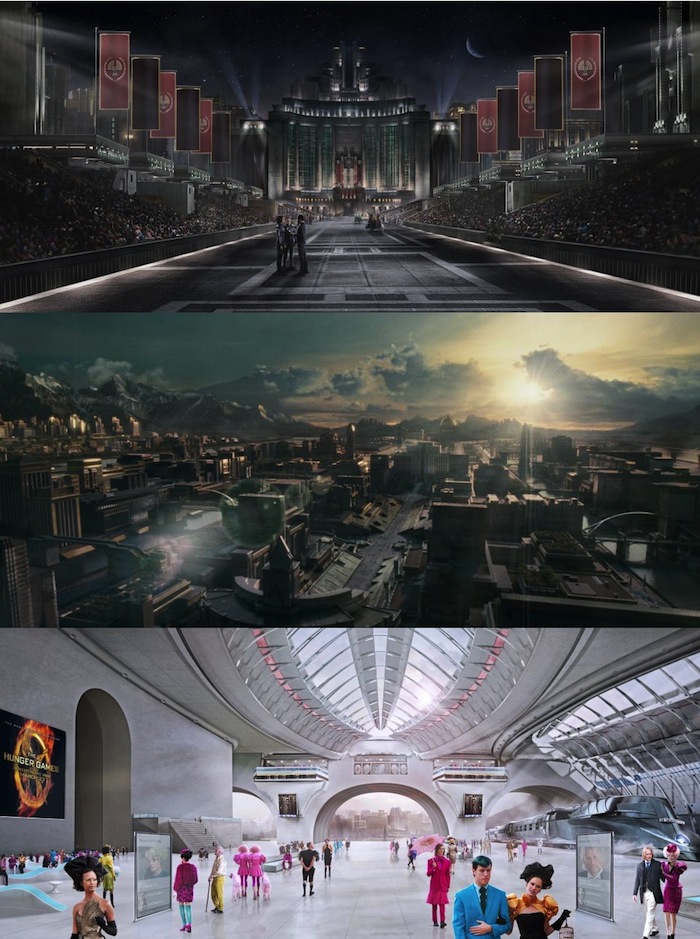 If The Hunger Games was adapted into specifically a musical, we can already gather some inspiration from the 3 soundtracks inspired by the film. Imagine some bluegrass, Appalachian Folk, indie rock, and alternative pop when we’re in the districts and arena and then something very showtuney and jazzy while in the Capitol. Andrew Llyod Webber mixed genres of music in his musicals, why shouldn’t that happen for The Hunger Games. Also, three songs were mentioned in the books. There’s “Deep in the meadow” aka Rue’s Lullaby, “The Valley Song” which Peeta mentions in the first book, and “The Hanging Tree” from the third book. Two of the three songs were given a melody for the movie. Plus in the books, Katniss has a beautiful singing voice. 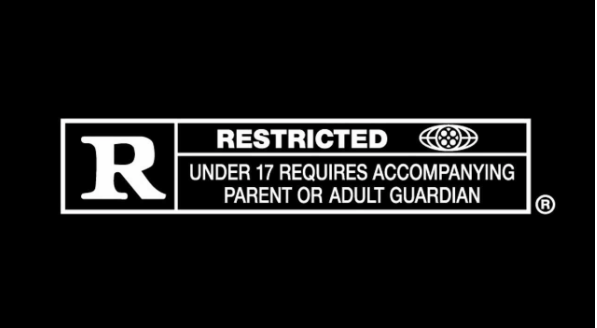 Content-wise, The Hunger Games is very dark and graphic. It is a story about a televised event where 24 kids from the ages of 12-18 are put in a dog-eats-dog survival competition until there is one survivor. The later books get more in-depth about what happens afterword if you survive the games. All of the movies have a PG-13 rating. To keep the first movie from being rated R, we don’t see all of the blood spilled on screen. Once you see something, you can never unsee it. With a live audience, it would be tricky to know how much murder is okay for an audience. Is it something very realistic or done very artistically and symbolically like in Sweeney Todd? A project like that would have to have a director and creative team that knows how much is too much. The intensity would change whether this would be on a proscenium, thrust, or even a real arena stage. With casting, someone would have to decide how young is too young for these characters to look. In the first movie, a few of the leading actors were around 2-7 years older than the characters they were portraying. It would be nightmare inducing seeing someone that young being murdered onstage. 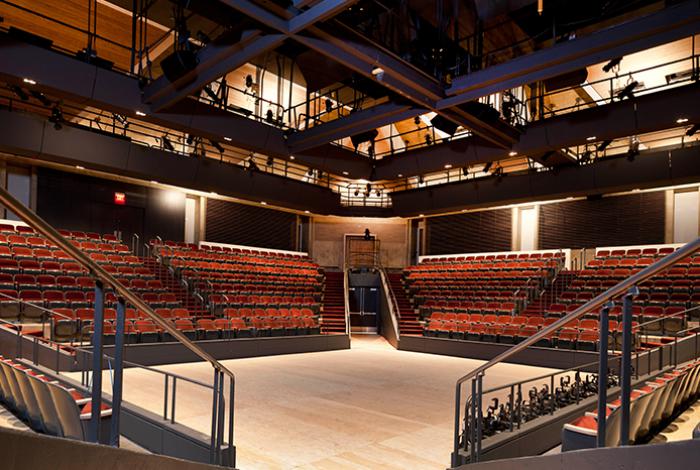 The Hunger Games doesn’t end after the first installment. It is Three, 3-act plays, each with their own arc. The big story being a girl from the middle of nowhere becoming the face of a revolution. But each book builds on itself with each act of the story. So either you only turn one of the books into a stage adaptation, speed through really good parts of the story, or have an 8 hour long show. Lord of The Rings musical anyone? 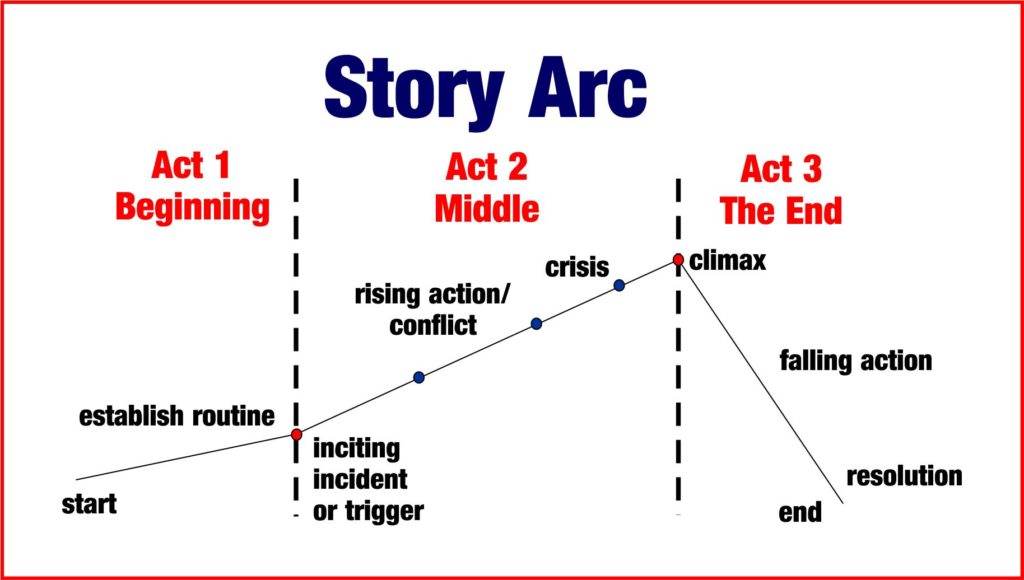 Even though the books are written from Katniss’s perspective, there’s a bunch of other interesting characters. And since their are so many characters, would there be more of an ensemble feel of a show? Would that change the story from person vs. nature vs. society to more of a People vs. Society? If we crammed all three books in one play would we see the same actress play Clove and Johanna? Do the actors playing stylist, and prep teams also play tributes? Would there be a divide between older and younger actors? Do some characters get cut from the stage adaptation? Some of these characters help to drive the plot forward. How expensive would it get to Costume all those people?

The Hunger Games is still very new. We would have to wait at least 10 years to see a stage adaptation. The last movie was released almost 3 years ago.

The Hunger Games would be very interesting to see onstage with its grand spectacle elements. Content and length wise it all comes down to sensitivity of the audience. Maybe the movies is as far as it will go. It would be very ironic to make a spectacle of the thing the author warned us about.