It’s the spookiest time of year… oooOOOooo.   So, to celebrate Theatre Nerd style, here are some real spooky stories of the stage. 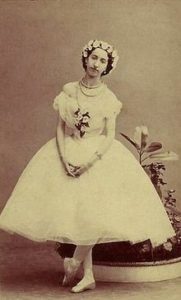 If you had the privilege of growing up a dancer, you’ve probably heard the cautionary tale of the ballerina who caught on fire during a performance. Details of the tale may have been fudged during the backstage gossip, but regardless, you knew you better not stand too close to the lights in your tutu otherwise you might have ended up like Emma Livry, the ballet prodigy of the romantic era, that is, until her untimely death.

The story begins with Emma waiting in the wings before her second act grand entrance. As she steadied herself for her performance she made the fatal mistake of fluffing her tutu next to a gaslight. Her skirt burst into flames sending Livry into a panic as she ran onto stage screaming and running around frantically in circles all while the audience and other dancers watched on in horror. Eventually, a fireman and another dancer helped to put out the flames but Emma’s burns were extensive. In an effort to be modest, she had clasped the fabric of her corset to her torso causing the corset to melt into her ribs. Additionally, she suffered burns on forty percent of her body including her waist, back, shoulders, thighs, and arms.

Emma spent the next eight months recuperating but ultimately died of sepsis upon the reopening of her wounds. Perhaps the most tragic part of Livry’s death was that it was all too avoidable. A fireproofing method for costumes was available and it was Livry herself who insisted against it due to the yellowness and stiff feel it gave the fabric. As if that weren’t bad enough, Ms. Livry didn’t even learn her lesson. During her recovery she remained opposed to fire-proof skirts: “ Yes, they are, as you say, less dangerous, but should I ever return to the stage, I would never think of wearing them- they are so ugly.”

Moliere- A Grave Performance and the Superstition of Wearing Green

Molière, died in the most dramatic of fashions- while he was on stage performing 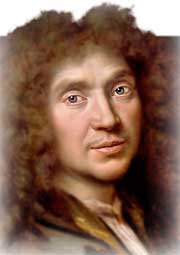 France’s Greatest Playwright, Jean-Baptiste Poquelin, better known by his stage name, Molière, died in the most dramatic of fashions- while he was on stage performing. Molière had long been suffering from tuberculosis, a condition he was thought to have acquired during a prison stay due to debt. Tuberculosis or not, nothing was going to stop him from pursuing his artistic endeavors.

The tragic night was set during a royal performance before King Louis the 14th. Ironically, the performance was Le Malade imaginaire (The Imaginary Invalid, AKA, the Hypochondriac) it was during this performance that Molière began to cough and gasp uncontrollably until he collapsed and began to hemorrhage. The performance stalled but, briefly, and Molière insisted that the show go on. After bravely forging his way through the rest of the play, despite a secondary collapse, he finally made it home. Hours later, Molière passed away. Sadly, he was denied his last rites, which led to a rumor that his soul didn’t make it to heaven, and that his ghost is still lurking about. On the night of his death, Molière’s costume was green; offsetting the superstition that green is an unlucky color to wear on-stage.

Drury Lane Theatre and The Man in Grey 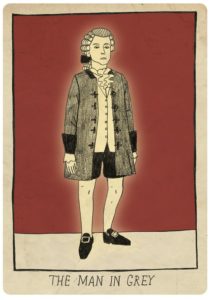 The Theatre Royal, Drury Lane, is the oldest operating theatre in London and is quite possibly the most haunted. Although there are many ghosts that have shown up at Drury Lane, it is the ghost referred to as The Man in Grey that is perhaps the most popular. The Man in Grey is thought to be the ghost of a man who’d been stabbed to death and whose remains were found in 1848 inside a passage of the theatre that had been walled up. The Man in Grey is said to dress like a nobleman of the late 18th century donned with a tricorne hat, dress jacket, cloak, riding boots, and sword. The ghost is said to lurk about between the fourth row and the royal box, which is near the spot in the wall where his remains were found.

Palais Garnier and the Truth behind the Phantom of the Opera

The chandelier in the theatre really did fall 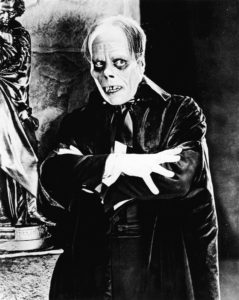 You may already know that the Palais Garnier theatre in Paris is the setting for the famous novel and musical, Phantom of the Opera. What you may not know is that the writer, Gastón Leroux was a French journalist whose specialty was investigative journalism on real-life incidents; Leroux’s famous tale, is indeed full of many real-life truths. For instance, the lake of water under the theatre is real, it’s actually more of a water tank, but it’s a body of water under the theatre. Also, the chandelier in the theatre really did fall, not only that, it killed someone. Yikes! Creepier still, is the disfigured contractor that helped build the theatre and who lurked about wearing a mask to hide his unsettling appearance. The man, named Erik (yeah, really!) was born disfigured and abandoned by his family, joined the circus, and eventually became an architect, of sorts. He was even said to walk about wearing dress suits and a cloak. Erik also had his own personal box to watch the performances without being seen. The creepiest part is that he really did fall in love with a singer who performed at the Garnier and he kidnapped her! Luckily, she was found and fled Paris. Erik was so distraught he walled himself up into his apartment under the opera house and ultimately died of starvation. Some time later his suspected remains were found, wearing a gold ring that he was known to wear.

If these stories don’t give you a newfound respect for the spookiness of the theatre than I leave you with this bit of trivia: The ghost light in theatres generally serves a practical use- safety; however, it’s there for superstitious reasons too- to appease the ghosts that are thought to haunt each theatre. The light remains on stage long after the actors go home so that the ghosts may perform thus, preventing them from cursing the theatre. So leave those ghost lights on and have a Happy Halloween!!!

Have your own theater ghost story? Tell us in the comments below…