It’s been a pretty long and hectic year for this actor/composer/writer/theatre supernerd. From Broadway to Disney, he has been pretty nonstop. If he was this amazing at 36, it’s hard to imagine what he’ll do at 37.

Here are 10 things we loved Miranda for this year:

Good MORNING ????.
Made you a mixtape.
It took longer than we expected, but we wanted to get it just right. #HamiltonMixtape pic.twitter.com/RDXW6Q35CO

Who else on Twitter gives their fans a creative good morning and goodnight tweet every single day? Add that to awesome pictures of him nerding out with other stars, travel pics and just overall inspirational messages. 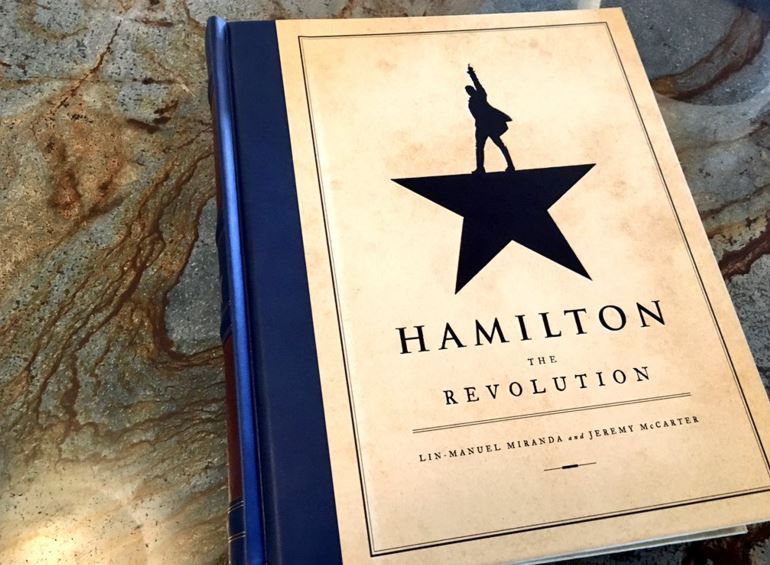 I have to admit, I was a bit late in getting this book. I thought I knew all there was to know about the making of this show, but this book dives into all aspects of creating the hit musical. From casting to discussing tech week at The Public, this is a must-read. Aside from the great insights and beautiful images, Miranda has also fully annotated every song in the show. Read the book and fall in love with the musical all over again.

3. That One Time SNL Became All About Theatre

Straight from the opening monologue, you knew this was going to be a very theatre-intensive episode. Even during the commercial breaks, all they could do was show advertisements for “Aladdin” and “Hello, Dolly!” From “Hamilton” to “The Music Man,” this episode had it all, and Miranda didn’t skip a beat. And let’s not forget the epic music video about cast parties.

Miranda has proven to be the gift that just keeps giving. Just when we’ve stopped listening to the “Hamilton” cast album a million times, we’re gifted the “Hamilton Mixtape.” Miranda took cut songs, his favorite R&B artists and even wrote some new songs that turned into this. We can even expect a second volume next year.

5. The Best Episode of Drunk History

This past fall, Miranda showed off his extensive knowledge about his favorite founding fathers in an episode entirely dedicated to Alexander Hamilton. There is drinking, guest appearances by Chris Jackson and Questlove, and, of course, a quick singalong to Semisonic’s “Closing Time.”

6. His Mission to Get Rid of Ticket Bots

This year, Miranda became a huge advocate to fight ticket bots. As if it’s not hard enough already to see “Hamilton” on Broadway, the bot issue has made it that much more difficult. These bots can get tons of tickets at once for any event and resell them for five times the price. Miranda wants this to stop, and has made it  his mission in New York.

7. All of His Talk Show Appearances

Miranda appeared on “The Tonight Show,” “The Late Show,” “Rachel Ray” and many more this year. of course, most of these appearances included doing some freestyle, but perhaps one of the most memorable interviews was when Miranda told Ellen his entire family reenacted a famous “Sound of Music” number in Austria. That, and he then proceeded to freestyle about cold showers.

Miranda took the “Hamilton” lottery a step further and auctioned off a bunch of experiences for donating to multiple charities this year. Not a bad way to remind people to spread the love.

In case conquering the theatre world wasn’t enough, Miranda is now involved in a ton of projects for Disney. Aside from being featured in the next “Mary Poppins” film and being named to have a role in the live-action Little Mermaid, Miranda helped create Disney’s latest hit, “Moana.” A great film for all ages, “Moana” features an empowering heroine and has a beautiful score. Not to mention, Miranda had a little too much fun making an evil Sebastian-like character with an incredibly catchy song.

“Hamilton” and Miranda were the stars of the Tony’s this year. Though the performances were brilliant, one acceptance speech in particular stood out. Even in the rough times of 2016, Miranda was there to remind us what was important.

Let us know in the comments what you’re looking forward to seeing Miranda do next year!