When Disney first announced it would be making a live-action version of the ‘90s animated classic “Beauty and the Beast,” the world was buzzing over who would play the role of Belle. After much anticipation, it was finally announced that Hollywood darling Emma Watson was cast as the animated heroine.

Reception to the casting was mixed as plans for the film began to unfold and other well-known actors joined the cast. But Watson’s musical debut is on the horizon, with the film set to waltz into theaters in March.

Here are five reasons why Watson will be perfect as Belle:

That’s right! There were skeptics galore following Watson’s casting, questioning whether she had the vocal chops to take on several of the film’s popular songs. Even after the trailer for the movie was released, some critics were not convinced. It wasn’t until recently, when Disney finally released a clip of Watson singing from the movie’s upcoming soundtrack, that the rumors were finally put to rest.

She could not look more like the animated version of Belle if she tried. It’s as if Disney drew her and she came to life. Early promotional photos released show Watson in Belle’s iconic yellow ball gown, and she’s the spitting image of the original character. 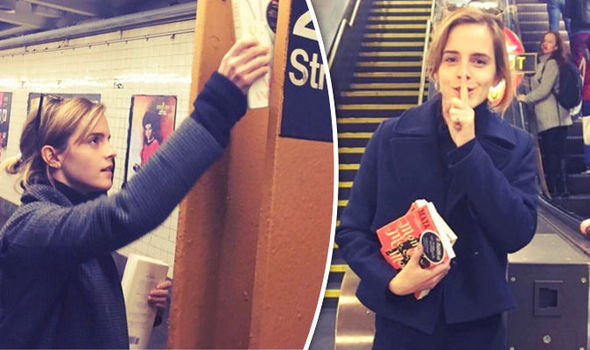 Belle’s character is well-known for being a voracious reader, consuming every book the local library has multiple times over. In fact, she loves books so much that the Beast gives her a library as a present.

Watson is also a reading enthusiast, having studied English Literature at Brown University. She recently started a book club called Our Shared Shelf on Goodreads, where she recommends books centered on equality. She has even taken a page out of the Beast’s book and given the gift of literature to London commuters, leaving copies of one of her favorite books on the Tube for anyone to read.

After her father fails to return home, Belle bravely goes after him in the woods and takes his place as a prisoner at the Beast’s castle. But she’s no ordinary prisoner. On multiple occasions, she stands up to the Beast and even shows him kindness and compassion.

Watson has more than enough experience playing a brave, outspoken and kind heroine, thanks to her years as Hermione in the popular Harry Potter franchise. Her Hollywood cohorts speak highly of her kindness and tenacity, with author J.K. Rowling pointing out the likeness between Watson and her Potter character.

Much like Belle, she never backs down from a challenge, becoming the UN Women Goodwill Ambassador and continuing her involvement in humanitarian work. While this work has made her a target for threats, she refuses to back down and instead uses the adversity to fuel her continued fight for equal rights.

Belle’s character thinks with both her head and her heart. She’s not swayed by the supposed town dreamboat and outright rejects him when he proposes. Instead, she opts to hold out for a man of substance who respects her and isn’t such a blatant misogynist.

A leader in the fight for equality, Watson has shown particular interest in gender inequality. She champions the HeForShe movement, encouraging people of all genders to stand together for equal rights. She’s also a vocal advocate for increased education for women and girls worldwide. Much like Belle, Watson has faced her fair share of criticism and naysayers for her actions, but she continues to charge forward and hold fast to her beliefs.

Excited to see the live-action remake? Let us know in the comments below…

Beauty and the BeastEmma Watson