While performers may receive the applause, those that work behind the curtain on Broadway are just as integral to the success of a show. Here are a few things you may not have realized about those working out of the spotlight:

Whether you work backstage in costumes, props, sound or one of the many other departments, your specific movement and job during the show is defined as a track. For instance, you might be on the Stage Right (SR) Deck Track if you move sets on the right side of the stage. You may be on the Female Ensemble Dresser Track if you dress women in the ensemble. The word “track” is added so that those working around you know the movement you make in the show and/or where to locate you if there is a problem. 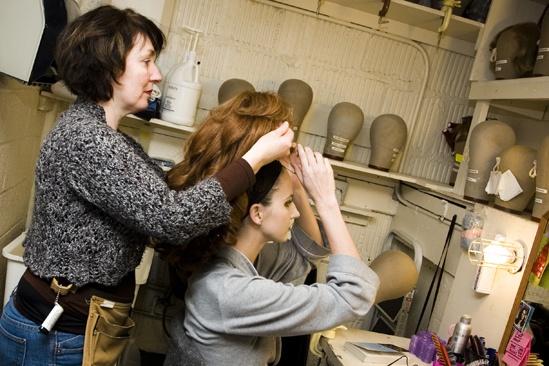 The wig team at a Broadway show keeps everyone’s hairpieces looking absolutely pristine with upkeep and restyling/resetting happening on most show days. In addition, in order to ensure wigs and other hairpieces don’t start to look messy during the actual performance, the wig team helps the actors get them on and off during quick changes and throughout the show. They also check in with performers after big dance numbers and/or portions of the show where wigs could be affected. This way, those who wear the wigs always look their best. Most shows that require many costumes and/or changes among a large group of people create a bunker-like area in the wings, behind the stage curtain or in the basement of the theatre. These bunkers are essential to ease costume storage, since many Broadway dressing rooms are too small to hold a lot of costumes, and to help keep the actors close to the stage during quick changes. The wardrobe dressers are then assigned to many of these areas during the performance to help the actors change their clothes. 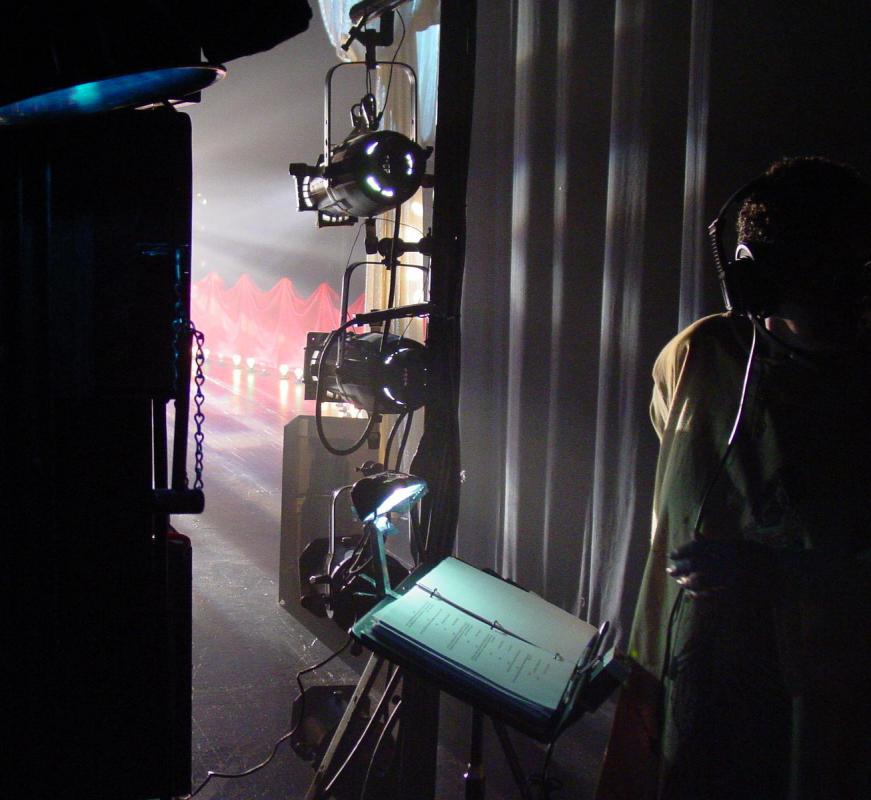 Just like the choreography happening onstage, backstage movement is as intricately choreographed. Backstage technicians from all departments work together during tech to make sure they all move set pieces, costumes and props in a set pattern. This “dance” ensures everyone has the opportunity to do their jobs in the time allotted so no one gets hurt and the show looks seamless onstage. Then, once the backstage choreography is figured out among the technicians, it is set in stone and carried out the same way every performance. 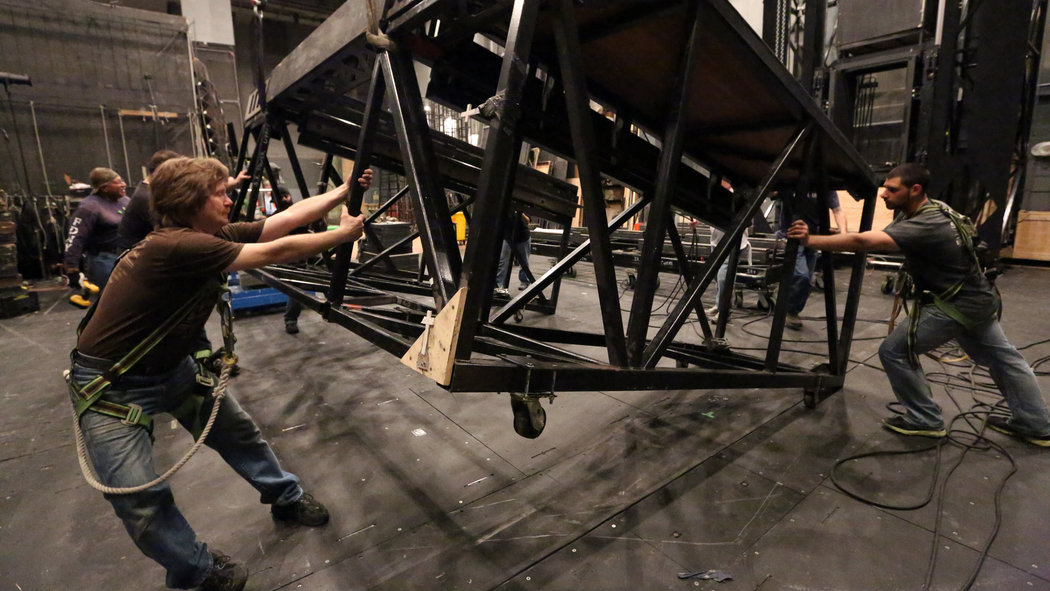 Broadway theatres may look opulent and large from the audience side, but backstage is not at all glamorous and offers very little room to play with.  Since wing and backstage space is usually small, much of the scenery is stored hanging from the ceiling and flown in on sides of the stage in the wings, placed on tracks and then moved onto the stage during the scene change. This work is done by the stagehands, and it certainly is not for the faint of heart. Many set pieces can be large, bulky, awkward and difficult to move.

Because no one knows how long a show will run or when your next gig will be once a show closes, people who work both onstage and backstage multitask with other jobs or ventures to stay afloat and financially secure. Many are also teachers, coaches, exercise/dance instructors, artistic team members or backstage personnel of other productions, or they own businesses, wait tables, do temp work, do administrative jobs and much more. 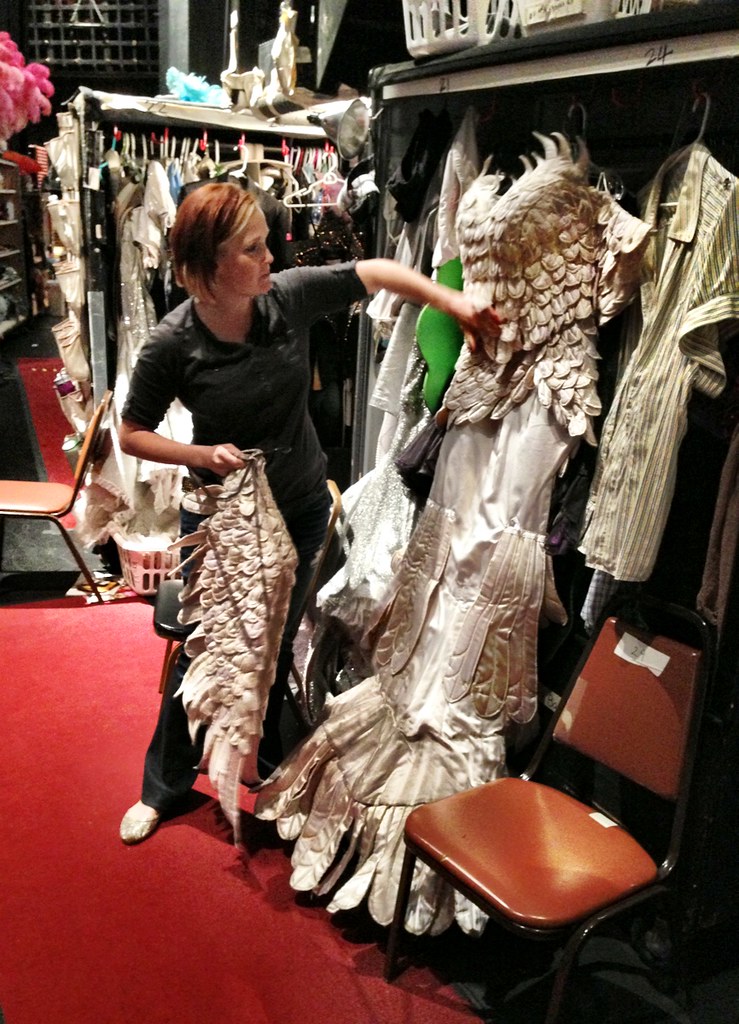 Backstage workers do “daywork” (as defined by the wardrobe department) and “work calls” (for all other backstage personnel) during the daytime hours. With eight shows a week, everything tends to get a lot of wear and tear. In order to keep a show looking like it did when it first opened, this time is needed to reset and repair costumes, props, set pieces and more. 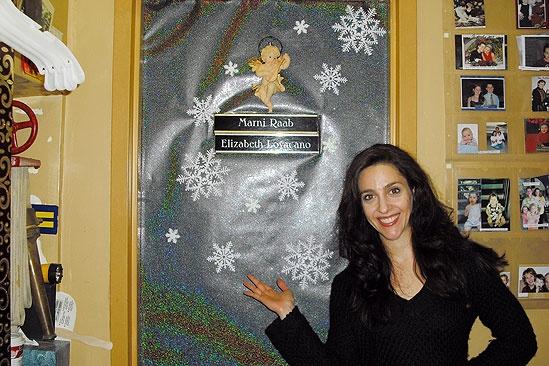 Fun activities such as Dollar Saturday, door holiday decoration contests, Secret Santa and more are all participated in by those who work backstage and onstage. Activities like this help break up the monotony of doing eight shows a week and doing the same track daily.

All moving parts that you see onstage are usually controlled by the automation department, which, in most cases, is someone in the basement or back of the house running the computer, which controls the machinery. Once this person is given the cue by the stage manager, he or she pushes a button on the computer and things onstage move. It’s not as easy as it seems. One wrong moving part at the wrong time or a computer glitch can have a domino effect. The scenery may not fly in or out or roll onstage at the right time. It can also cause possible problems for the actors who have to maneuver around the scenery as it enters and exits the stage.

Sometimes there is a makeup department on a show. Other times, those that work in the wig department also do the makeup. And, other times, there is no makeup department at all. Pictured here is the “Lion King” cast. Their makeup is very specific, and thus, that show has a team that helps them to apply it. On other Broadway shows, the performers will do their own makeup after getting some basic instruction during tech from the creative team about how they want the performers’ faces to look. This is why it’s imperative for performers to know how to apply their own basic makeup for the stage, because you may still have to do your own, even on Broadway.

What are your tricks from backstage? Let us know in the comments below…