Perhaps one of the biggest theatre nerds of all time is “Gilmore Girls” creator Amy Sherman-Palladino. As the daughter of a comedian and dancer, it’s no surprise that this writer bears a love for the arts. This show is chock-full of of witty banter and hidden tributes, many of which center around famous thespians, musicals or plays. Whether you loved or hated “Gilmore Girls: A Year in the Life,” you can appreciate Stars Hollow’s undying love for theatre.

These references are coffee for the soul:

Theatre References in the Revival

Years later, it seems as though the residents of Stars Hollow have stayed pop-culture savvy. Throughout the original seasons, Lorelai’s frequent references to famous plays and musicals made her one of the biggest theatre nerds in town. In fact, the revival opens with Rory arriving home looking way too glam to have gone through annoying TSA lines. According to her mother, a more realistic look for someone fresh off a flight would be “singing ‘I Dreamed a Dream’ with a bad haircut.”

Lorelai certainly has a few other quips about the Great White Way — she references “Rock of Ages” and admits she’s seen “Kinky Boots” multiple times — but it’s mostly other characters who pay tribute to theatre. Big, bad, bossy Taylor Doose decides a gay pride parade should be the next event on the town’s calendar, and just in time for the anniversary of a Liza Minnelli record. Rory references a character from “Death of a Salesman,” while Logan Huntzberger apparently knows his “Fiddler on the Roof.”

Perhaps the most obvious of references comes in the form of the “Stars Hollow Musical,” an outrageous affair commissioned by none other than “Town Meeting” Taylor. Unlike the not-so-memorable Stars Hollow diorama back in Season 5, the musical is written by real-life Broadway composer Jeanine Tesori, who won a Tony Award for her “Fun Home” music last year. Playing the very odd lead roles are Broadway stars Sutton Foster and Christian Borle, who make this ultra-wacky production a treat for those who know them.

Theatre References in the Original Series 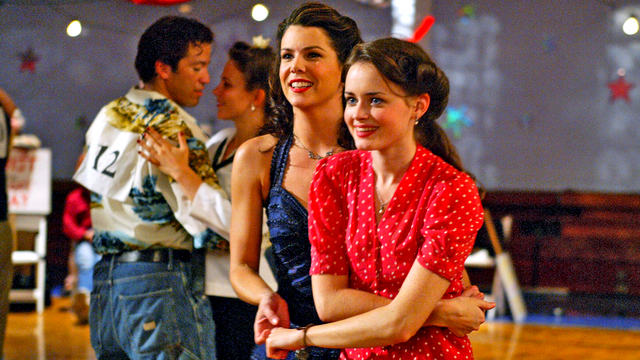 To dive into the endless world of artistic references in “Gilmore Girls” would be to go full-on Rory Gilmore and write a novel. However, diehard fans can easily pinpoint some of the season’s best homages. Here are some of our favorites:

Sookie and Lorelai channel their inner theatre nerds when discussing the baby chick Rory brings home. Like any Tennessee Williams fan, Lorelai names the bird “Stella” after “A Streetcar Named Desire,” while Sookie asks which of the famous actresses who play Blanche acted as a muse for this choice. Sookie asks, “Vivian Leigh or Jessica Tandy?” and Lorelai answers, “Hello! Tandy!”

When Rory inherits a trust fund from her rich great-grandmother, Sookie is quick to tell Lorelai, “We can sing the money song from ‘Cabaret!’ You can be Liza, I’ll be Joel.”

This tribute had an entire episode named after it! The second season premiere, “Sadie, Sadie!” pays homage to a song from the iconic Barbra Streisand musical “Funny Girl.” After getting engaged to Max Medina, Sookie sings, “Sadie, Sadie, married lady,” and happily proclaims, “STREISAND!”

We’re guessing Kirk was busy during rehearsals of the “Stars Hollow Musical,” as he’s an “accomplished” film and stage performer in the original series. Remember that time he played Tevya in the Stars Hollow Elementary School production of “Fiddler on the Roof?” We can’t forget.

We learn two things about Lorelai Gilmore in this scene. First, she can easily down six cups of coffee (but let’s be real, we already knew that) and second, she and Rory are huge “Rocky Horror Picture Show” fans — so much so that they love dressing up when they go to a viewing. Luke even agrees to play Dr. Frank-N-Furter, but we’re 99 percent sure he didn’t pull through.

Did we miss your favorite reference? Share it in the comments below…