Before and between musicals such as Wicked and Hamilton, there were many musicals that had very short runs and have since been forgotten about. Though some of these musicals were critically successful, they did have the commercial success they needed to become breakout hits.

Here is a list of five great songs from some shows that have been overlooked:

“Michael in the Bathroom” – Be More Chill

This contemporary musical, based on the novel by Ned Vizzini, is the classic tale of a guy in high school who is tired of being a loser. Throw in some robotic pill that has the ability to make you cool, and you have a story. With a score by Joe Iconis, this musical has tons of amazing songs. With only a short run Off Broadway, this musical did not get much commercial success. MIchael in the Bathroom is one of the best tracks from the show because it embodies every teen’s anxiety of just wanting to fit in. The whole album is definitely worth a listen.

“Love is a Question Mark” – Taboo

This musical is a little out there. Set during the New Romantics scene, it’s the story of artists trying to make it in that world, while it also heavily focuses on the life of Boy George. George wrote the music for this show that only had 100 performances, despite its four Tony nods in 2004. Love is a Question Mark is a stand out in this show. Just listen to the harmonies.

Ok, before you envision Charlotte Bronte rolling over in her grave, just hear me out. No, I do not think this is the best idea for a musical. At least it wasn’t Wuthering Heights, right?

Anyway, this musical was only open for six months. It was nominated for five Tony awards and has now barely been spoken about since. Best song by far in the musical is “Sirens”, which is great portrayal of Jane and Rochester’s love story. This show’s musical style is very reminiscent of other musicals, such as Les Mis. Very dramatic and very satisfying.

“One Knight” – Wonderland: A New Alice

This is probably one of the most random songs on the list. With only 33 official performances in 2011, this musical came and went very quickly. The musical tells the story about Alice after Wonderland and how she has to go back. No, this is not a musical version of Through the Looking-Glass. Anywho, this track is a huge hidden gem. Think Backstreet Boys in Wonderland. That is what this song is. Enjoy.

I left this song for last because the composer of this musical is extremely well know, has multiple Tony Awards under his belt, and has won the Pulitzer Prize for Drama. All of these awards were won for Rent. Yes, this musical was composed and written by Jonathan Larson. Before Rent came Tick, Tick…Booom!, Larson’s semi-autobiographical musical about his struggle to become a successful composer. This show has yet to have an official run on Broadway. One of the last songs in the musical, “Louder Than Words” is both triumphant and a bit sad. If you love Rent, you’ll definitely love this track. 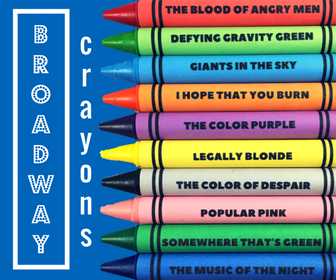