Theatre is the most amazing art form in the world by far, right? However, it can also be the most frustrating because each show is essentially “written on water,” as they say. What’s there in front of your eyes on that stage is gone forever by 11 p.m., and that exact performance will never happen again. It’s what makes theatre so unique and vital.

Sometimes, though, we are lucky enough that someone grabs a camera and lets us into the crazy world of Broadway to highlight the amount of collaboration and conflict it takes to make magic happen every night.

Though this is by no means a complete list, here are nine essential documentaries every theatre nerd should see: 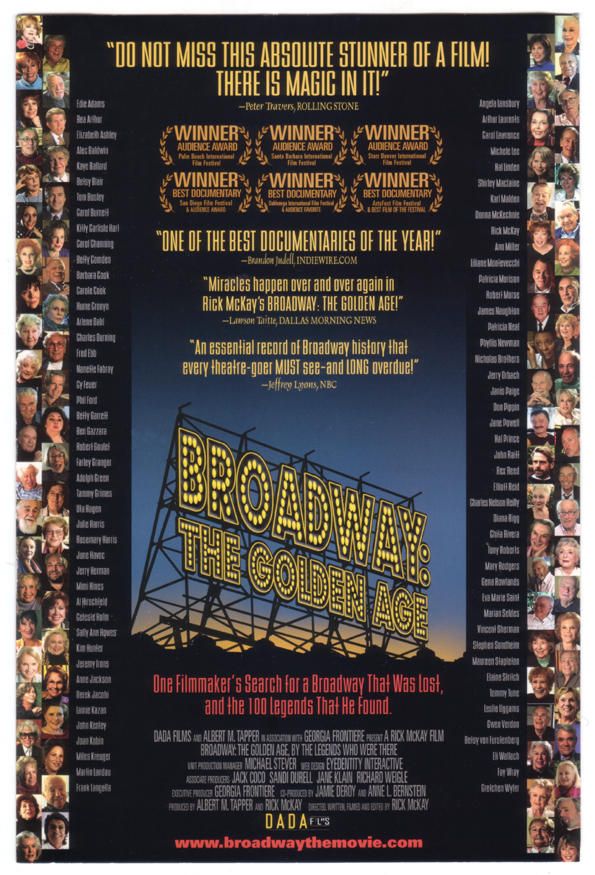 Filmmaker Rick McKay’s 2004 documentary is a verifiable oral history book given to us by the Theatre Gods themselves. This truly wonderful film features interviews of more than 100 stars of the so-called “Golden Age of Broadway” conducted over a span of six years. It’s actually the first film of a planned trilogy and will be followed by “Broadway: Beyond the Golden Age” and “Broadway: The Next Generation.” This is a really special movie, not the least of which because many of the interviewees have now sadly passed on. We cannot recommend it enough. 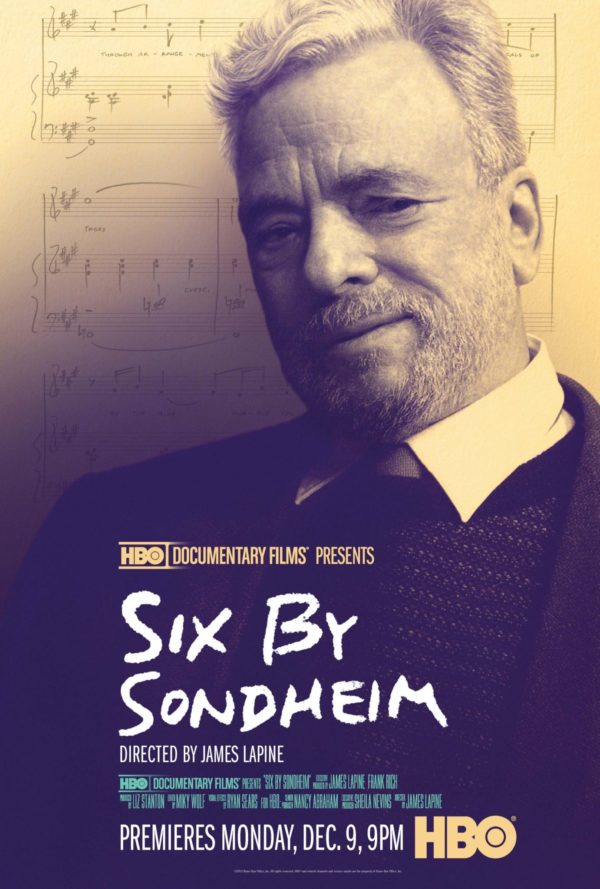 A stunning documentary produced for HBO in 2013, “Six by Sondheim” documents the man himself by focusing on the backstory of six of his greatest songs. The film came from an idea from writer and former New York Times critic Frank Rich and was produced and directed by frequent Stephen Sondheim collaborator James Lapine.

What makes this documentary different from any others on this list is that it contains new, original stagings of the six songs along with typical interviews and archive footage. Highlights include Audra McDonald and husband Will Swenson performing “Send in the Clowns” and a smashing version of “Opening Doors” starring Darren Criss, Jeremy Jordan, America Ferrera, Laura Osnes and even Sondheim in a deliciously ironic cameo. 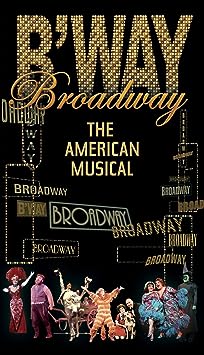 In 2004, PBS undertook a massive project when it attempted to document the history of American musical theatre from 1904 to the present day. Boy, did it deliver! This beautifully produced six-party documentary series was directed by Michael Kantor and narrated by Julie Andrews. Fascinating interviews and rare footage are interspersed with stunning photographs you’d be hard pressed to find anywhere else. It’s a must-see for any serious theatre junkie! 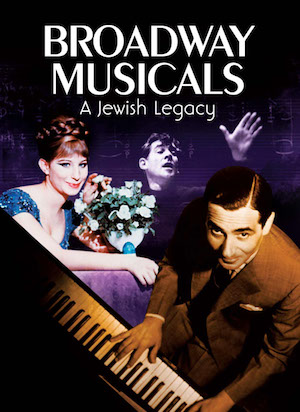 An offshoot of the 2004 PBS series above, “Broadway Musicals: A Jewish Legacy” was produced and directed by the same team. This time, Joel Grey, the master of ceremonies himself, serves as the narrator. It’s an absorbing look at the golden age of musical theatre in which just about every major composer and lyricist was Jewish (save for Cole Porter). The documentary aired on PBS in 2013 and is available on DVD. 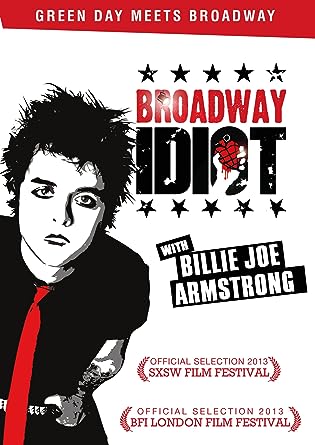 Iconic punk-rock band Green Day and Broadway director Michael Mayer teamed up in 2010 and rocked Broadway with “American Idiot,” based on Green Day’s smash hit album of the same name. This awesome documentary follows the process of the creation of the show through to when Green Day frontman Billie Joe Armstrong stepped into the role of St. Jimmy. This 2013 film is a rare chance to see a modern rock musical take shape, and it’s a great look at a big-name star making his Broadway debut. If you loved the show “American Idiot,” this movie is definitely for you. 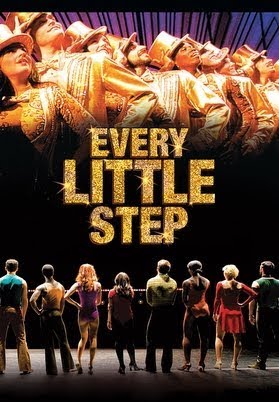 Art truly imitates life in this documentary as thousands of actors audition for the 2006 revival of “A Chorus Line” on Broadway. Modern-day triumphs and heartbreak are layered with interviews of members of the original Broadway cast. The documentary debuted in 2008 at the Toronto Film Festival, earning great reviews. Owen Gleiberman of Entertainment Weekly gave the film an A rating, calling it “a movie as layered and enthralling as its subject.” Though it’s hard to become emotionally invested in these performers’ lives and pull for them, since we know only a few will make the cut, this is still totally worth it. 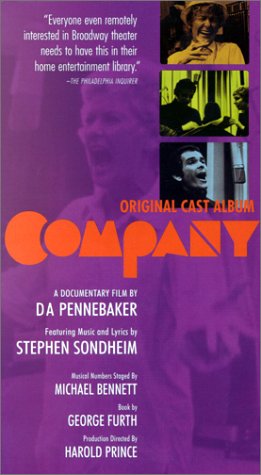 Shortly before Sondheim’s landmark 1970 musical “Company” opened on Broadway, legendary filmmaker D.A. Pennebaker had his camera rolling as the original Broadway cast recorded the original Broadway cast album. We get to see many of the show’s numbers, including “Another Hundred People,” “Being Alive” and “Not Getting Married Today.” The climax of the film is when Elaine Stritch struggles to record “Ladies Who Lunch” in the wee hours of the morning after everyone else had wrapped. Watching the legendary performer and Sondheim pursue perfection is a rare glimpse at the guts it takes to gain the glory. The documentary was meant as a pilot for a series in which several cast album recording sessions would be filmed, but sadly, this film was the only one ever produced. 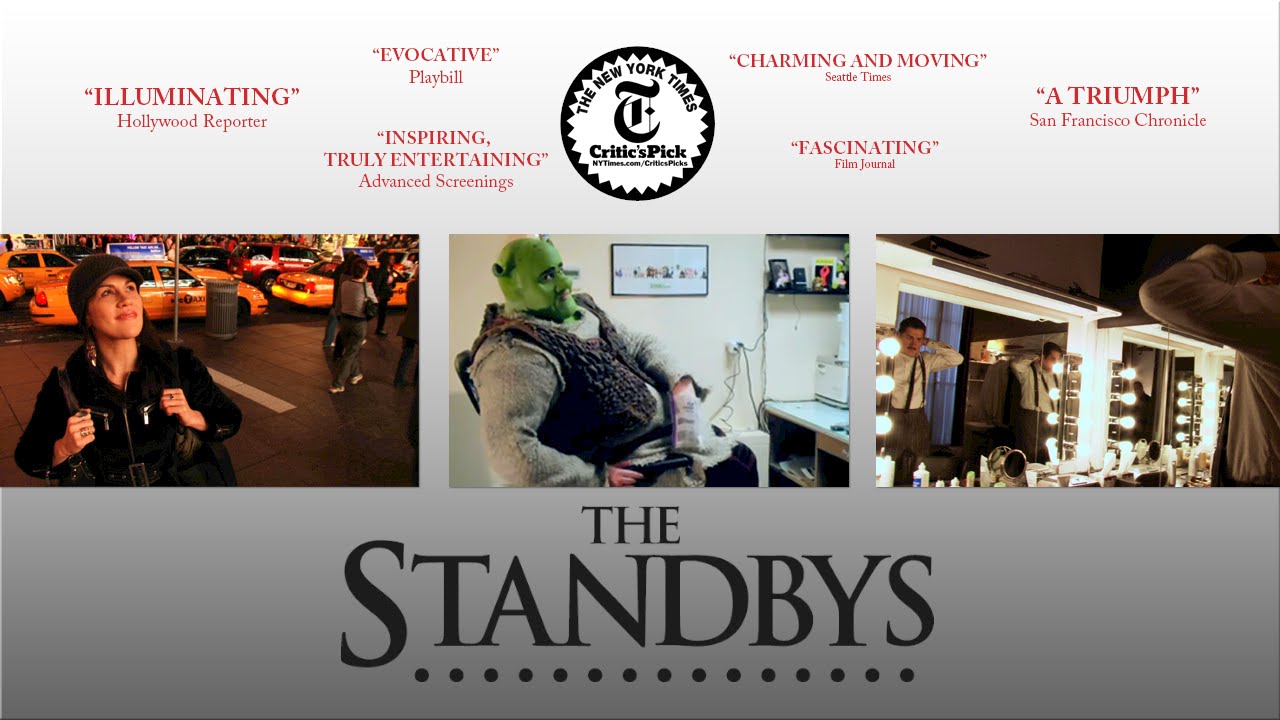 When you open your Playbill and see that little slip of paper with the words “At today’s performance…” your heart naturally sinks a little. But for the person whose name is on that slip, it could be the moment their lifelong dream comes true. This wonderful 2012 documentary takes a look at the difficult and often misunderstood of standbys. It follows Broadway stalwarts Ben Crawford (“Shrek,” “Charlie and the Chocolate Factory”), Merwin Foard (“Aladdin,” “The Addams Family”) and Aléna Watters (“West Side Story,” “Sister Act”) as they wait in the wings for their chance in the spotlight. Watch this one to get a look at this vital but often thankless role in the Broadway hierarchy.

9. ‘Best Worst Thing That Ever Could Have Happened’ 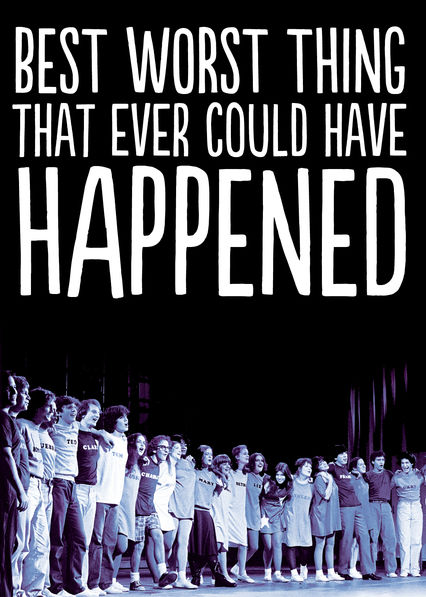 The newest entry to the theatre documentary world is one of its best! “Best Worst Thing That Ever Could Have Happened” premiered in 2016 and tells the story behind the final Hal Prince-Sondheim collaboration, “Merrily We Roll Along.” Directed by original cast member and noted director Lonny Price, the film combines new interviews with the cast and creative team with newly discovered footage of the casting and rehearsal process. Few shows have had such a dramatic history as “Merrily,” which was one of the most anticipated shows of the 1980s and ended up only playing 16 performances. All of the triumphs and pain that Broadway can bring are shared with the audience like never before. The movie is currently available to stream on Netflix.

How many on the list have you seen? Which of your favorites weren’t mentioned? Let us know in the comments…